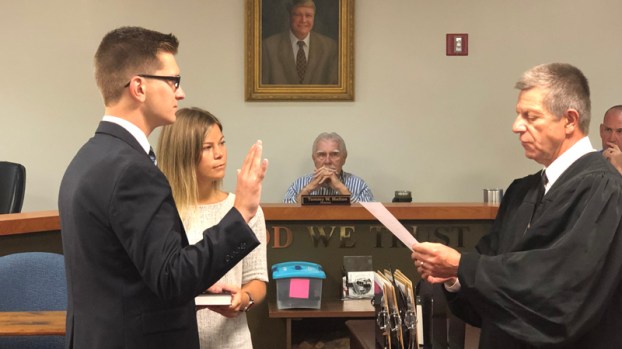 COLUMBUS—It was a historical moment Monday morning as commissioner Jake Johnson was sworn into office as the first state representative from Polk County in 54 years.

The Polk County Board of Commissioners met Monday morning for a special meeting to accept Johnson’s resignation and to see him sworn in as the representative for the North Carolina House of Representatives District 113.

Johnson will serve out Henson’s term and has already announced he will run for the seat in 2020. Johnson will represent Polk and Transylvania counties as well as a portion of Henderson County.

Former Polk County Commissioner Ted Owens said it has been over 50 years since a person from Polk County has been a state representative.

“Good luck to you and God bless you,” Owens said.

Dick Shaughnessy with the Polk County Republican Party said the party is extremely proud of Johnson.

Polk County EMS Director Michael Crater said on behalf of the county employees and citizens who have seen Johnson’s leadership skyrocket, he will be missed.

“It was my pleasure to be a part of it,” Crater said. “I’m very happy for you. God bless you.”

Polk County Board of Commissioner Chair Tommy Melton said not only did Johnson win a county commissioner seat in 2016, but he was the high vote getter and served as chairman. Melton said Johnson has contributed tremendously to the county and his family is impeccable.

Commissioner vice chair Myron Yoder said Johnson lost his first election in the primary, but he did not stop.

“That was just a minor roadblock,” Yoder said. “I really appreciate he didn’t quit. He came back as the high vote getter.”

Yoder said Johnson works hard and thanked his mom and dad for giving him that work ethic.

“You got on top of the ticket and now you are on your way to Raleigh,” Yoder said. “We are really excited about that.”

Commissioner Paul Beiler said it has been a pleasure to get to know Johnson and to see his passion and leadership abilities.

“We are proud to have a son of Polk County representing us,” Beiler said. “I want to wish you all of God’s blessings.”

“I know your focus will still be here with your family and friends and fellow citizens of Polk,” Gasperson said.

The meeting room was crowded with employees and residents Monday morning. Johnson said he appreciated the county doing all they have and thanked them for their kind words. He said it will be an honor to serve the district and thinks the board has had a good three years.

“I’ll look back and be extremely proud,” Johnson said.

He said he is really excited to expand on that to all three counties on the state level and looks forward to the partnership with Polk County going forward.

“Thank you so much for the kind words,” Johnson said. “God bless and I look forward to working together in the future.”

The Polk County Republican Headquarters Executive Committee will meet soon to recommend a replacement for Johnson on the board of commissioners. Commissioners will then appoint the new member, likely at the next commissioners meeting, scheduled for Aug. 19.

Widening of I-26 towards Asheville to start next month

Construction will commence soon on a major Interstate 26 project to reduce traffic congestion and improve travel in Buncombe and... read more