TRYON—Assistant Chief James “Tank” Waters has been appointed to the position of Chief of the Tryon Fire Department on July 26, 2019 after the sudden and unexpected death of Chief Geoff Tennant.

Waters has 25 years of service in public safety, starting his career of helping others back in November of 1994. Waters joined the Tryon Fire Department as a volunteer in 2005 and made the transition to a career firefighter in 2012. Waters was promoted to the position of Assistant Chief in 2014, first serving as Assistant Chief to Tryon Fire Chief Joey Davis and Deputy Fire Chief Johnny Hipp.

A Nixle alert was issued by the Town of Tryon on July, 26 announcing Waters promotion to Chief of the Tryon Fire Department. In that alert, Tryon Town Manager Zach Ollis said he was confident of Water’s ability to lead the department in a manner which will reflect positively on the Town of Tryon and it’s residents.

Waters is a humble servant who believes the praise and credit he has received is thanks to the department and the people he works with. In 2018, Waters won the Best Firefighter award from the Tryon Daily Bulletin’s Best of reader voting. The quote he gave for receiving the award is mirrored by his actions. 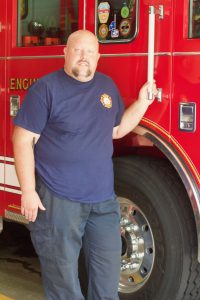 Waters quote reads, “It’s very humbling [to receive this award]. I wish that everybody who is a firefighter could receive this award. The amount of energy and effort that goes into [the job] is large. I’m glad that I’m a small part of a very large organization. I think it is a combination of things [that motivates me]. [I’m] born with a servant’s heart — I want to help people — but at the same time, I’m in a position where I can take someone who is dealing with the worst experience in their life, and have a small hand in stabilizing them and helping them where they are at. I would like thank the guys and gals I work with. It takes everyone — it’s not just a one-person show. Someone once told me that a great chief officer is only as good as the people underneath them, and that’s true. Your chiefs and your department heads are absolutely nothing without the structure before them, which are the members of your organization. It doesn’t matter which department it is, from Tryon all the way to Greensborough—any chief is nothing without his men and women beneath him. We are the ones who make decisions, but they are the ones who take those decisions and make something out of them.”

In 2014, Waters was presented with a certificate of commendation from the Town of Tryon for his courage and commitment to protecting the citizens of Tryon. Tryon Daily Bulletin Reporter Leah Justice covered the event and spoke with Waters and his former Chief.

A decision of two firefighters to break through a window and go into a burning home in an attempt to save a local resident resulted in the Town of Tryon presenting them with certificates of commendations.
Tryon Town Council met Tuesday, May 20 and recognized deputy fire chief Johnny Hipp and assistant fire chief James “Tank” Waters for their efforts in attempting to save a man during a house fire on Ford Ridge Lane on April 2.
Tryon Fire Chief Joey Davis asked the audience to close their eyes as he played the communication audio during the structure fire, which occurred around 10:20 p.m.
The audio included the location with emergency crews saying the subject is possibly still inside the home.
“That changes the mindset of the Tryon Fire Department,” Davis said, adding that Tryon was assisting Columbus in their district. “It didn’t take very long for one of our firefighters to get on scene and see, that yes, we have a serious situation.”
Davis said fire was coming through the roof of the house so they knew immediately the fire was severe.
Bob Scoggins was driving the truck with Hipp and Waters with him. Local police officers were on scene and could see the occupant but couldn’t make entry because the fire was too severe, Davis said.
“Engine One pulls up and Tank and Johnny asked what to do,” Davis said. “I said you rescue. You get to the victim.”
Waters said as he and Hipp looked through the window they could see the man lying flat on his back on the bed. There was no way to get through the door because of the fire conditions, he said, saying the roof was falling in at different parts of the house.
“I said we need to go back and go in the window,” said Waters. So the two busted out the window with their hands, he said. Waters said he picked Hipp up into the window, with Hipp retrieving the victim and him pulling the victim and Hipp back through the window.
David said from the time the truck arrived on scene until the victim was in the care of EMS was four minutes. “I’m very proud of both of them,” Davis said.
Det. BJ Bayne with the Polk County Sheriff’s Office said what is being left out is that the rescue process had to switch quickly from a fire and rescue to a crime scene.
“They noticed (the victim) had a gunshot wound,” Bayne said. “They slowed down enough and told me how the room was laid out. With the details they gave me it made my work a lot easier.”
Bayne said for the firefighters to notice details of the scene was remarkable. “This fire was raging,” she said. Bayne said she went home around 6 a.m. and the firefighters were still on scene trying to save her crime scene.
“If my house is ever on fire I pray that you’re there,” Bayne told the firefighters.
Davis presented both Hipp and Waters with plaques during the meeting. “If you want an example of two heroes in Tryon, they are standing right here tonight,” Davis said.
The investigation determined that the occupant took his own life and he was already deceased when the firefighters entered the home.

By Samuel Robinson and Leah Justice