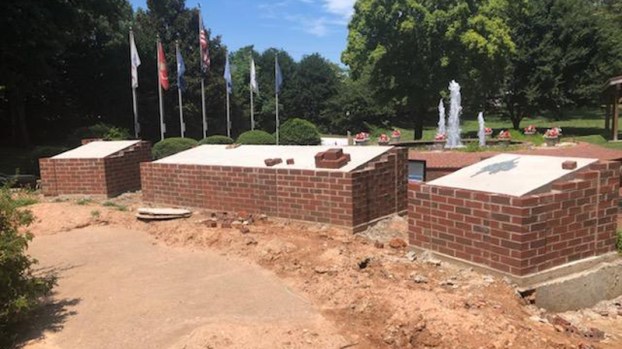 The Charters of Freedom project is progressing at Veterans Park in Columbus. Columbus Councilman Robert Williamson said last week that pavers will be available for purchase in honor of memory of someone in the military. The project is expected to be complete by the end of August with a dedication being planned for the fall, likely on Veteran’s Day. (Photo by Leah Justice/Tryon Daily Bulletin)

Replicas scheduled to be complete by end of August

COLUMBUS—Much like Veterans Park in Columbus, local residents will be able to dedicate a brick to loved ones who served at the new Charters of Freedom, currently being constructed.

Columbus Town Council met last Thursday and heard from councilman Robert Williamson about the progress on the Charters of Freedom.

Polk County was gifted the replicas last year of the U.S. Constitution, the Bill of Rights and the Declaration of Independence. Construction began in the last few weeks and is expected to be complete by the end of August. A dedication is being scheduled for sometime this fall.

Williamson said construction is progressing and there will be a fundraising drive to dedicate the pavers.

Councilman Mark Phillips asked how much the pavers will cost.

Williamson said the pavers will be $100 each and will have a logo on them so people can dedicate the pavers to the military, either Army, Navy, Marines, Air Force, etc.

“The plan is to put paver bricks between the sidewalk and the settings,” Williamson said.

Williamson said he will bring in forms when the committee sets the schedule.

Williamson also said the completion date is not yet known because another project is being done at the same time in Rutherford County. He said the dedication will likely be on Veterans Day, but that has not yet been decided.

Mayor Eric McIntyre asked how the town and county will let everyone know about the bricks.

Williamson said there will be advertisements in the Bulletin and announcements on Facebook.

Williamson said the pavers will be engraved before they are installed, similar to how the bricks at the Veterans Park fountain were done. He said there potentially can be 300 bricks donates.

Williamson also said Foundation Forward, Inc. the organization who is donating the Charters of Freedom is funding 100 percent of the project. Each project cost about $20,000. All the contributions for Polk County’s project will offset the costs and help the foundation complete other projects.

Bears are out and about all over the area, including this one spotted Tuesday evening near downtown Tryon. This bear... read more