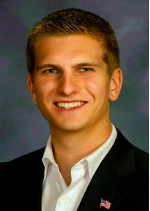 Henson pleaded guilty to cyberstalking Tuesday and announced Wednesday he would resign his seat effective Friday at noon.

Johnson, who was Polk County’s high vote getter in 2016, has already announced he will file in December for Henson’s seat. Henson represents Polk, Transylvania and some of Henderson counties in the North Carolina House of Representatives District 113.

Henson said on Tuesday that he would continue to serve out his term, which ends in 2020. But on Wednesday announced that after much thought, he wants to spend more time with his children and that he submitted his resignation.

To replace Henson, the executive committees from each of the three counties’ republican headquarters will hold a convention to appoint a replacement to fill out Henson’s term.

“I hated what happened with Cody,” Johnson said. “We are praying for him and wish him well.”

Republican parties will meet between the three counties to appoint a replacement for Henson, but it had not been announced as of press time when that meeting would be.

The General Assembly is currently in session, but on a break, and expected to return in August. Most notably, the General Assembly still needs to approve the budget. If there are no special sessions after this session, lawmakers are not scheduled to meet again until 2020.

If Johnson is appointed to the seat, he will have to immediately resign as a Polk County Commissioner. Johnson served his second year of being a commissioner as the chairman of the board and has announced that he will not seek local re-election in 2020, as he would run for the District 113 seat.

If Johnson is appointed to as a state representative, the Polk County Republican Party would recommend a replacement to serve out the remainder of Johnson’s term, which will end in December 2020. The Polk County Board of Commissioners would then seat the recommended appointee. That person would fill the remainder of Johnson’s term and would then have to run for election in 2020 if they so chose.

Henson was elected as a state representative in November for his second term.

He pleaded guilty Tuesday in Transylvania County to one count of cyberstalking, which is a misdemeanor.

Henson accepted an agreement for deferred prosecution and 18 months of probation as well as obtaining a mental health assessment and treatment and to complete a domestic violence abuser treatment class.

Henson was also denied access to firearms over the course of his probation.

State prosecutors did accept a stipulation that Henson be allowed to travel for legislative work during his probation. His resignation, however, is effective at noon on Friday.

Because the plea agreement is a deferred prosecution, if Henson successfully completes his probation and treatment, the charge will be dismissed.

He will be on supervised probation the first year and if he meets all the requirements, the judge can make his last six months unsupervised.

August 2nd through the 4th    UPSTATE—Back to school commercials are making their way back onto the screen across the... read more