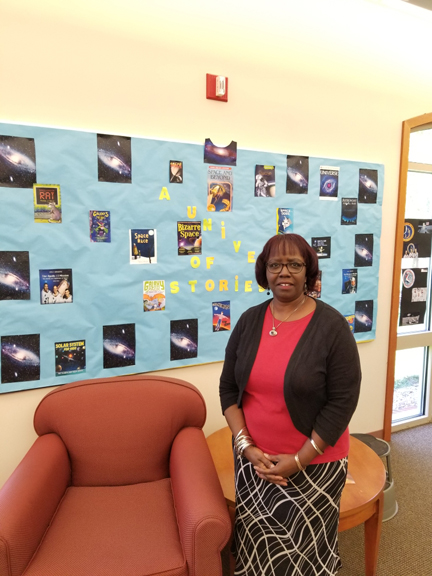 Karen McDowell will be retiring officially from the Landrum library at the end of August; she has served the Landrum community for 32 years. (Photo by Sam Robinson/ Tryon Daily Bulletin)

Looking back at a wonderful career

McDowell has worked for the Landrum Library for 32 years, starting first at the old library on Rutherford Street in October of 1987. On August 30, 2019 McDowell will officially retire from the Landrum Library, marking the end of her 32-year career working with the children of Landrum.

McDowell grew up in Spartanburg and graduated from Spartanburg High School before going to Limestone College where she majored in Theater. While a student at Spartan High and Limestone, McDowell worked at the Spartanburg Library as a Shelver, responsible for returning books to their proper shelves and aiding the other staff members.

McDowell recalls how significant the move to the new building was for the library staff and the community, “We were all excited about he move to this new location, this library was all about the community. We asked them what they wanted to see, took those suggestions and this is what we got. We had to coordinate and speak with the County officials about those ideas too.”

McDowell is the “Tween” Assistant Event Coordinator, tween referring to children that are primarily in fifth and sixth grade between the ages of 10 and 12. She helps create, and produce the programs and events at the library. Those events have a wide range; they can be anything from movies, arts and crafts, games, or some other form of experience. “I try to make everything fun for the kids, I always open my program with a “get to know” portion, kind of an introductory thing,” McDowell said. “We play a game to introduce the kids to one another.”

The one program, or program series that McDowell credits as being her favorite, is the educational series she conducts during Black History Month, sharing the history and work of famous African-Americans. Part of the series includes monologues and readings performed by McDowell where she gets to use her passion for theater. “I love being able to use my theater background with my job, especially during Black History Month. I love portraying an African-American, introducing kids to famous African-Americans,” McDowell said. “It lets me use my theater background to animate and express those experiences.”

McDowell has performed at the Tryon Little Theater in the past and said that she loved the experience, her first performance at the Little Theater was in Nunsense. It was a musical comedy, McDowell said it is a beautiful, fun show and that they performed it at competitions and on many occasions they did many encore performances.

It is clear from the first moment McDowell starts speaking that she has a clear passion and love for the community. “I think what I will miss most is the people. Not just my age group (the tweens) but the younger ones as well,” McDowell said. “I have worn many hats over the years during my time here, and I have had many experiences with all of the (age) groups here. I have had my hands involved in a lot of programs here at the library.”

One thing that McDowell has been working on at the Landrum Library is to make the tween section more friendly and inviting to the kids. While she realizes that the furniture and items she wants to change will not be finished before her retirement, she said she was happy that the next person to come in and fill her roll would benefit from the changes.

McDowell has the plan to not make plans for her retirement; she wants to take some time to herself and to travel. “I know that God has a plan for me, I don’t know what it is yet, but he is going to lead me there,” McDowell said. “I have had 32 good years here at the Landrum Library, and I am proud to say I have enjoyed those 32 years.”

A man who can never be rivaled