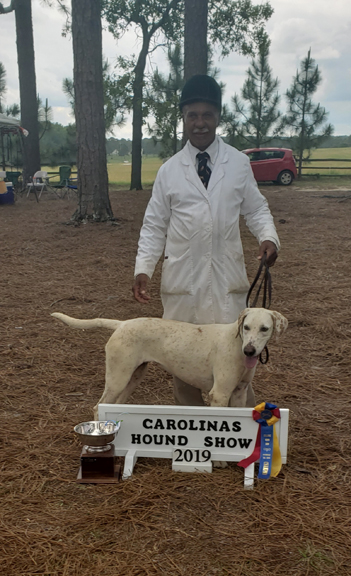 The newly formed Goodwin Hounds were quickly recognized by the Masters of Foxhounds Association and hunted sporadically last season.  The first official outing was to the Performance Trial sponsored by Sedgefield Hunt of Greensboro, NC but held in Southern Pines.  Thirteen hunts were represented competing 65 hounds.  Each hunt chooses what they consider to be their top five hounds to compete for their hunt..  All Goodwin Hounds hunted well but top honours went to Goodwin Raquell who finished fourth overall.

April took hounds to Thomasville, GA and the Southern Hound Show.  The competition is daunting but something one is very proud to be part of.  The only Goodwin Hounds ribbon went to a young , unentered (not hunted yet) named Raptor who held his own in the “big ring”.  We expect to see great things from this hound next season.

The May Carolina Hound Show has returned to the Walthour Moss Foundation in Southern Pines.  The venue has had many improvements and the show was most enjoyable.  Raquell proved she was not only a top notch hunting hound but also was champion of  the Performance Trial bench class.  A dozen other ribbons were won including Reserve Champion Crossbred Bitch.

Entries were not sent to the Virginia Hound show but the trip was made.  Friendships refreshed, hounds swapped and Tot was invited to present a trophy in the English ring.  It was fun to present the trophy (Green Creek had won twice in the past) to Spencer Allen of the Live Oak Hunt.

In July it was time to change hats and Tot travelled to Chicago to judge the Mill Creek puppy show.  What fun when it was revealed that two of the top prizes went to hounds by Green Creek Remount bred by Tot himself.

Now it is time to get back to business. Noses down and hit the woods!

More kittens have been coming in than are going out at the Foothills Humane Society. In a recent period of... read more