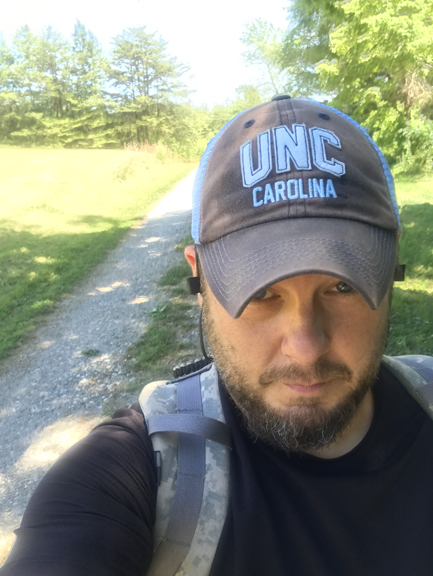 An update on #FWD22 and Frank Hill

COLUMBUS—If Columbus residents weren’t used to seeing Frank Hill hiking Peniel road in May, they sure are by now. Hill has been hiking on Peniel Road and through Downtown Columbus to raise awareness for the #FWD22, or 22 Veterans, 22 Miles, 22 Pounds, initiative that he started.

Hill was a medic in Iraq and Afghanistan serving as a solider in the United States Army. Hill held the rank of Captain and served in the Army for ten years, his service included two combat deployments.

In an effort to raise money and awareness on the incredibly high number of suicides that are committed by veterans everyday in the United States, Hill began hiking 22 miles per week, while carrying a 22-pound rucksack. The 22 miles and 22 pounds coincide with the 22 American Veterans that commit suicide everyday.

Hill started raising money through pledges that he donates to to The Permission to Start Dreaming Foundation. The foundation focuses on finding the best tools and resources to enhance the mind, body, and spiritual wellbeing of active duty military personnel, veterans, first responders, and their families. One of the main goals of the foundation is to provide an outlet for veterans to seek counseling and help if they are in need.

As of July 17, 2019 Hill has made a significant impact on his goals. Hill said “I am blown away with the success of my campaign. I didn’t break any (of my) middle aged bones and managed to get within sight of the finish line for both donations, and miles.” So far Hill has raised $2,089 of his $2,200 goal and rucked a distance of 180 miles, just 40 shy of his 220 mile goal. In addition to those milestones, Hill said he has dropped nearly 50 pounds in the process.

The finish line wont be on his familiar route on Peniel, Hill will be making the final ruck in New York while celebrating his honeymoon.

“I will be knocking out my 40 miles up and down Peniel and Hugh Champion with the final four miles saved for New York City on the 27 of this month,” Hill said. “I grew up in Manhattan until high school, so it seemed appropriate to finish in Strawberry Fields in Central Park.”

After completing his #FWD22 campaign, Hill said that he endeavors to complete his Masters level Counseling Certification in order to council veterans, as well as taking a much needed break to rest his feet.

For more information on The Permission to Start Dreaming Foundation visit, www.ptsdfoundation.org. To view Hill’s progress so far and keep up with his pledges, visit https://pledgeit.org/fwd22