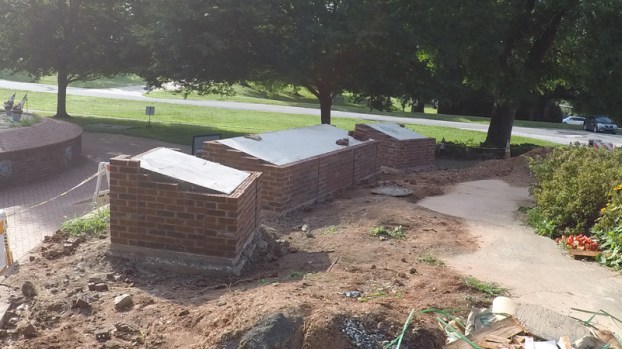 The Charters of Freedom, replicas of the Declaration of Independence, U.S. Constitution and Bill of Rights is being constructed at Veterans Park in Columbus. Much of the work has been donated. A dedication ceremony is being planned for the fall. (Photo submitted by Robert Williamson)

Foundation laid for Charters of Freedom

COLUMBUS—Polk County should soon have replicas of the Declaration of Independence, the U.S. Constitution and Bill of Rights for residents and visitors to view.

Columbus Town Councilman Robert Williamson, who is helping with the project, gave an update of the progress last week.

Williamson said the concrete was poured last week and the brickwork has started. Pavers for the walk area in front of the three settings were also delivered.

Following the pavers and brickwork, Williamson said the top units with the charter documents will be placed.

“Foundation Forward, sponsors of the Charters of Freedom have secured many donations for the project here in Columbus,” Williamson said. “Three cubes (about 2 tons) of bricks were donated by Statesville Brick Company, picked up by Polk County Maintenance and unloaded by Rodney McKaig and his forklift from Carquest.”

Other donations have been made by Southern Concrete, who donated concrete for the foundations, Sommers Masonry, who donated masonry and brickwork and Henson’s Lumber Co., who donated lumber, masonry mortar and sand.

Polk County was gifted the Charters of Freedom last year by Foundation Forward Inc. The Charters of Freedom are displays of the Declaration of Independence, the U.S. Constitution and the Bill of Rights and are located in several other areas in North Carolin. County commissioners tasked the county appearance commission to find the best location in the county for the displays. The appearance commission recommended Veteran’s Park in Columbus and county commissioners and Columbus Town Council agreed earlier this year on the location.

A dedication for the Charters of Freedom is being planned for this fall. The displays are built to last hundreds of years. Part of the dedication will be a time capsule, which will be opened in 2076, the 300th anniversary of the country.