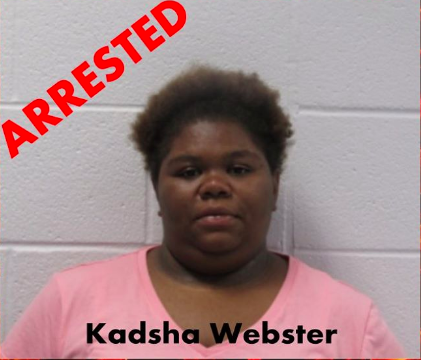 TRYON—The Polk County Sheriff’s Office arrested a Tryon woman this week on a charge of arson following a residential fire in late June.

Kadsha Webster, 24, of Tryon, was charged with second-degree arson, according to the sheriff’s office.

The fire occurred on June 26 at 134 Jackson Street Ext., Tryon. The sheriff’s office took over the investigation of the fire.

According to the sheriff’s office, detectives developed information that led to Webster as the person responsible for the crime.

Several local fire departments responded to the fire, with the initial call saying there could have been occupants inside the home.

After a complete search of the residence, no one was located inside.

Although not a total loss, the home suffered significant smoke and water damage, according to the Tryon Fire Department, mostly on the main floor inside.

The sheriff’s office said people can help “Burn an Arsonist” by reporting any arson to the office by calling 828-894-3001.