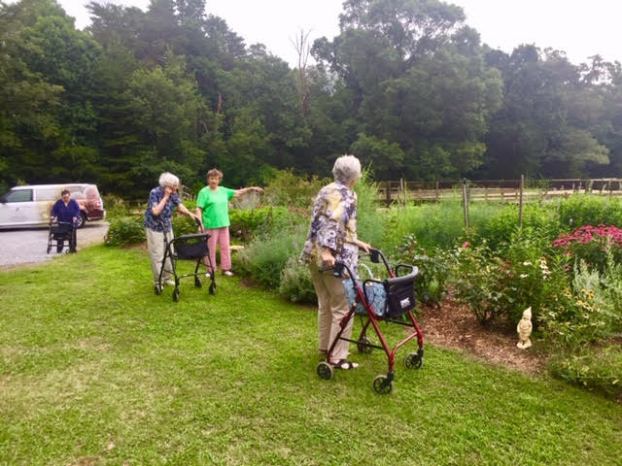 Paul is currently beginning his second week of leading a tour of historic rose gardens throughout England, and the rest of us, state-a side, are following along with the daily photos he is posting on social media: Sissinghurst, Mottisfont Abbey, a lunch and wine tasting with Lord Throckmorton of Coughton Court…

Hang on, let me get my Hot Pockets out of the microwave…

Anyway, I’m loving following all of this vicariously. I’m delighted they’ve had several consistent days of sun, including a marvelous excursion to Brighton where, as you well know, it’s the law that you must have fish and chips served in newspaper and pretend you’ve never heard of cholesterol as you munch all the fried crispy bits at the bottom of the wrapping while looking out to sea from the  Victorian pier.

“Why aren’t you there?” Friends here and there pipe up. “Doesn’t seem fair!”

Trust me, it’s exceedingly fair. Paul has worked very hard for several months to pull together this tour of 15 fortunate folks who, by all accounts, are appreciative, adventurous and jovial, even on the days when there is but a watery sun at best. I’m not ‘Hyacinth,’—I need not to wheedle my way into meeting a Lord and Lady for a blue blooded selfie. Yes, of course I was invited, however a farm does tend to hold one captive, but truth be told, I am, quite happily, at home.

At home. In my sparkling, clean, crisply sheeted, freshly vacuumed and toilet-seat-down home. And, gasp, it’s remained sparkling clean. So clean, as a matter of fact, that I’m entertaining!

On Tuesday, having mowed and pulled weeds recently enough so that the flowerbeds looked presentable and the fields nearly park-like beneath the oaks, I had invited the social director from a local retirement community to escort a group of residents over for tea in the garden with a stroll about the grounds and a cuddle with one of the more obliging horses in the stable.

Our ’tea,’ owing to the humidity, turned into lemonade and cookies, but as I watched the ladies disembark the facility’s van, I had rather a feeling of deja vu as my own mother, along with Paul’s, had been long time residents of this same community. They also had been part of the last group who visited the farm.

Standing back and watching them negotiate across the lawn with their walkers and canes, bending to admire the perennials and what the Japanese beetles had left of the spring roses, I heard their soft exclamations of appreciation as a

welcomed breeze fluttered the silvered tops of their heads. Bluebirds and doves made wary appearances and the bay mare poked her head over a stall door to enquire whether a peppermint might be forthcoming.

(I shall leave off the fact that the dogs, left unattended as my back was turned, took it upon themselves to leap on top of the picnic table and begin scarfing the platter of cookies. Other then that, it was quite the bucolic scene.)

Our modest farm certainly isn’t Sissinghurst and can’t compare to David Austin’s rose garden in Shropshire. There isn’t a honey colored stone pub at the end of the street or lady’s tearoom adorned with charming chintz in our town.

We’re outside little Landrum, South Carolina. And my heart is far too full to be anywhere else.

I’ve always said that columnists that resort to using lists in their weekly musings are being lazy and not putting... read more