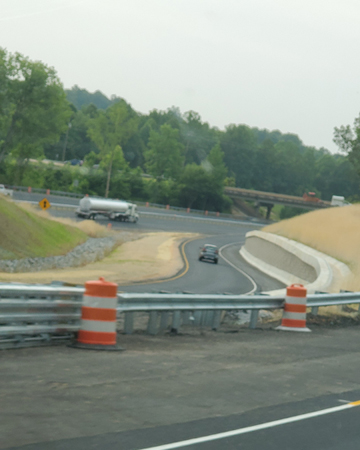 The new ramp connecting U.S. 74 and Interstate 26 East is now open. The project has been ongoing for almost two years as part of a project to alleviate drivers exiting in Columbus and going around the roundabouts. The new ramp was officially opened on Tuesday. (Photos by Magan Ethridge/Tryon Daily Bulletin)

COLUMBUS—After close to two years, the new ramp to take drivers directly from U.S. 74 to Interstate 26 East is finally open.

The ramp opened on Tuesday to through traffic.

North Carolina Department of Transportation Communication Director David Uchiyama said there will still be some lane closures here and there for additional work but the new ramp is officially open as of Tuesday.

The approximate $19 million state project began in October 2017, with several projects attempted to be complete prior to the World Equestrian Games, held in September 2018 at the Tryon International Equestrian Center in Mill Spring.

The new U.S. 74 ramps at Interstate 26 have been on the state’s list to be completed for years.

The original completion date of that project was Aug. 17, 2018. Vecillio & Grogan, Inc. DBA Sharpe Brothers were awarded the contract.

Approximately 125,000 gallons lost  COLUMBUS—Anyone traveling through Columbus in front of Polk Memorial Gardens got a show Thursday afternoon as water was... read more