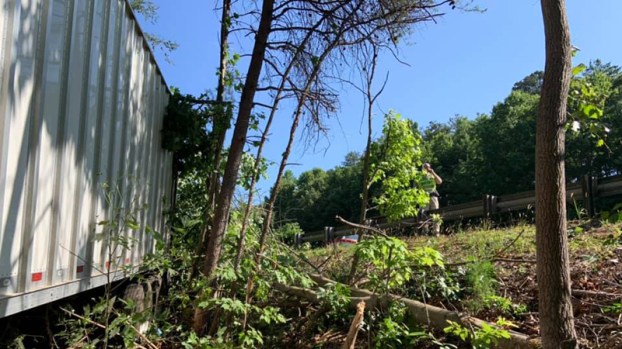 COLUMBUS—A truck driver was injured after running over an embankment along Interstate 26 between Landrum and Columbus Friday morning.

The driver was taken to the hospital.

The accident occurred on eastbound Interstate 26 and one lane of traffic was closed near during rescue efforts and cleanup.

The wreck occurred near mile marker 70, across the interstate where a truck driver died on Tuesday in a westbound wreck.

Tuesday’s wreck involved both sides of the interstate being shut down from 8 p.m. until around 6:30 a.m. Wednesday because of approximately 2,000 gallons of gasoline being spilled. The North Carolina Department of Transportation plans within the next week to re-asphalt the westbound lanes round mile marker 70 because of damage from the gasoline.

Aaron Eric Smith, 43, of Pauline, S.C. died in Tuesday night’s wreck. The highway patrol said Smith, who was carrying the gasoline, did not slow down and ran into the back of another tractor-trailer. The other truck driver was taken to the hospital with non-life threatening injuries.

The truck driver from Friday morning’s incident was taken to Spartanburg Regional Medical Center. His condition was unknown as of press time.

No timeline yet of when work will be complete  MILL SPRING—People may have noticed some grading and work being done... read more