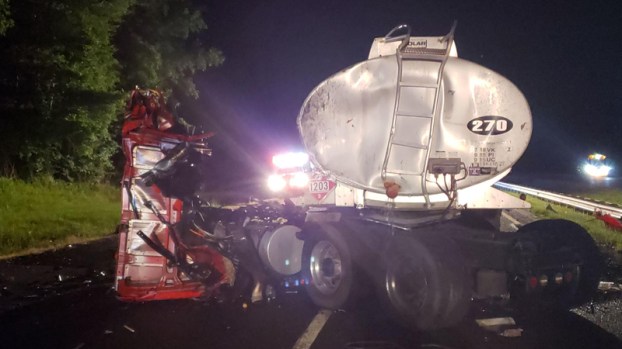 A wreck involving two 18-wheelers Tuesday night ended in one trucker’s death and the spilling of approximately 2,000 gallons of gasoline across Interstate 26 near mile marker 70. Both the westbound and eastbound lanes were shut down until Wednesday morning. The identity of the trucker killed has not yet been released. (Photo submitted by Bobby Arledge)

Interstate shut down all night as 2,000 gallons of gas spills

COLUMBUS—A wreck on interstate 26 around mile marker 70 westbound Tuesday night caused one death and about 2,000 gallons of gasoline to spill.

The wreck occurred around 8:39 p.m. with two 18-wheelers, one that was carrying an 8,000-gallon tanker. The man driving the gasoline truck died at the scene, according to Polk County Emergency Management Director and Fire Marshal Bobby Arledge. The victim has not yet been identified.

The driver of the tanker truck carrying gasoline had to be extricated from the truck. The other driver, who had an empty freight, was taken to St. Luke’s Hospital by ambulance. His condition was unknown as of press time.

Arledge said the North Carolina Highway Patrol is investigating the cause of the wreck and will identify the victim once family is notified.

The highway patrol has a dash cam off one of the trucks it is analyzing to help determine the cause of the wreck.

Polk County called a cleanup company out of Greenville, S.C. to clean up the gasoline, which did enter a nearby drain.

Both sides of the interstate were shut down because of all the fumes and the gas spilling, according to Arledge.

Get to know Your Polk County Historical Association