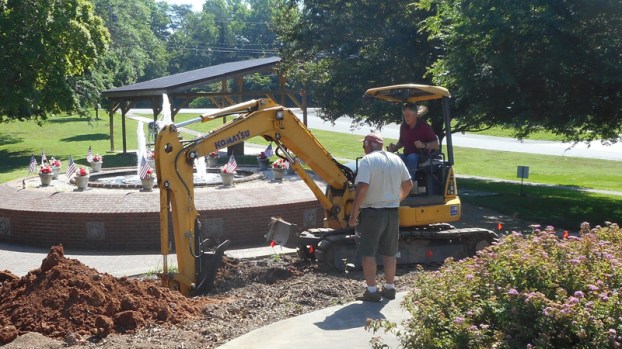 Myron Steppe in the excavator and Don Ramsey, construction manager from Foundation Forward digging foundations for the Charters of Freedom in Columbus' Veteran's Park. (Photo submitted by Robert Williamson)

Construction for Charters of Freedom begins

Materials and most of the labor being donated

COLUMBUS—Construction has begun to install the Charters of Freedom at Veterans Park in Columbus.

The Town of Columbus Public Works Department prepared the site last week and foundations were dug on Tuesday of this week.

Columbus Councilman Robert Williamson said Don Ramsey of Foundation Forward and himself measured out the foundations on Tuesday and Myron Steppe, of Steppe Construction dug the foundations for the three permanent educational displays.

Polk County was gifted the Charters of Freedom last year from Foundation Forward to place the displays of the Declaration of Independence, the U.S. Constitution and the Bill of Rights. Polk County worked with the Town of Columbus to decide Veterans Park was the best place for the structures.

Williamson said setting the rebar and concrete for the foundations was scheduled to begin on Wednesday and that construction should continue the next few weeks.

In accepting the gift, Polk County Commissioners tasked its appearance commission to find the right locations for the displays.

County commissioners and the Columbus Town Council approved the location being in Veterans Park, which is owned by Columbus.

Materials for the Charters of Freedom project and most of the labor are being donated, according to Williamson. Private donations are also being accepted so that no tax dollars will be spent on the project.

Foundation Forward Inc. out of Valdese funded the project, with the exception of preparing the site.

People can visit ChartersOfFreedom.com for more information about the organization.

Fire on the grade

On Saturday, May 25, Engine 23 from Saluda Fire & Rescue assisted Columbus Fire Department with a vehicle fire on the... read more