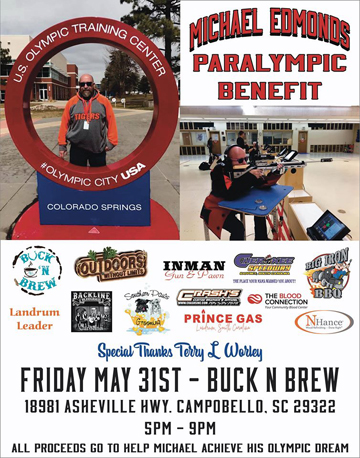 There will be several items up for auction, some from Southern Paws Pet Spa, Prince Gas, Inman Gun and Pawn, and More. All proceeds from the auction will go to Edmonds to help fund his trip to compete in the Paralympics as well as purchase the necessary equipment for his training.

Michael Edmonds competes in the Team USA Paralympics Acoustic Shooting Team. Edmonds is legally blind, but with the aid of proper equipment he is able to locate and shoot targets with acoustic aid. Acoustic shooting in the Paralympics requires the use of a bright light that shines on a white target; the light is reflected into the rifle’s scope. The scope converts the light into acoustic sounds that are relayed to the shooter via headphones. As the sight, and therefor the rifle, aim closer to the bull’s-eye the acoustic sound changes in pitch to signal to the shooter that they are on target. The acoustic equipment allows an individual that is legally blind to shoot a target with pinpoint accuracy at distances up to 50meters. At the competitions, a spotter is assigned to each shooter that gives them general guidance and helps to provide safety on the shooting line.

Edmonds has a great sense of humor about his situation, he has designed stickers that read, “The Adventures of the Blind & Crazy” that he sells to raise money for his travel and expenses while competing for Team USA.

In addition to the benefit, The Blood Connection will also be present doing a blood drive. They will be taking donations for local teen Dacey Tessigner who is battling Leukemia. All donors will receive a $20 Buck N Brew gift card. Buck N Brew asks that you call or message them to make an appointment to make sure you are able to give blood during the blood drive.