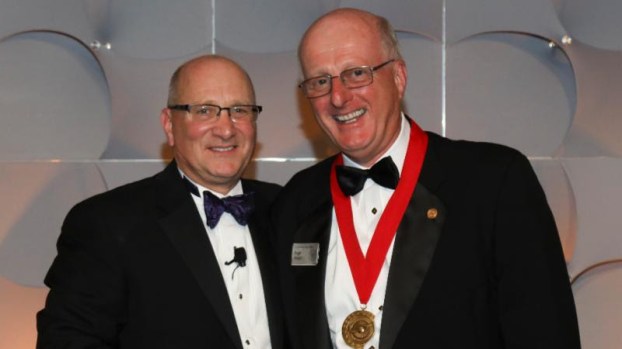 GE Aviation President and CEO David Joyce (left) and Roger Seager (Right) after the induction ceremony on May 16 at the GE Aviation headquarters in Evendale, Ohio. Roger was inducted into GE Aviation’s Propulsion Hall of Fame for his contributions to the company and aviation industry. (Photo by GE Aviation website)

TRYON—On Thursday May 16, Roger Seager was inducted into the GE Aviation’s Propulsion Hall of Fame. GE Aviation is a subsidiary of General Electric with their headquarters located in Evendale, Ohio. GE Aviation is among the top aircraft engine supplies and offers engines for the majority of commercial aircrafts. GE Aviation is a world-leading provider of jet and turboshaft engines, components, integrated digital, avionics, electrical power and mechanical systems for commercial, military, business and general aviation aircraft.

Seager is joined by seven other inductees of the class of 2019 who all made outstanding contribution to GE Aviation and the aviation industry as a whole. GE Aviation’s Hall of Fame now has a total of 146 members including the 2019 class.

Seager is a graduate of the United Kingdom’s Southampton University. Seager is a six year resident of Tryon after retiring from GE Aviation in 2013. While at GE Aviation Seager’s career spanned across military, commercial, and international businesses. One of the biggest accomplishments was his key role in the formation of Aviage Systems. That system was a joint venture between GE and Aviation Industry Corporation of China. Seager also played a key role in marketing for the T700 helicopter engine and the CF6 commercial powerplant. Seager also held the position of Vice President of Global Sales before becoming GE Aviation’s first regional executive in China.

“After years of almost daily travel to customer and business locations around the world, Tryon provides a relaxing and scenic home base for our very active retirement lifestyle,” Seager said.

2019 is also the 100-year anniversary of GE Aviation, commemorating the first day that the turbosupercharger took to the skies in 1919, GE Aviation has worked to change how airplanes fly. GE Aviation President and CEO David Joyce spoke at the induction Hall of Fame induction ceremony, “I’m thrilled to celebrate the careers and contributions of eight truly incredible people whose dedication to GE Aviation has materially advanced our purpose as a company, I can’t think of a better way to celebrate our 100-year history than by honoring this year’s inductees, who all helped secure where we are today and secure the next century for this business.”

Old Men of the Woods   TRYON—On Sunday May 26, FENCE will be holding a free concert that is open to... read more