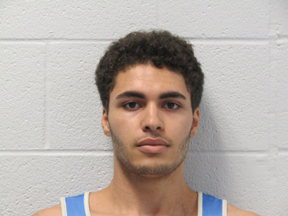 TRYON—A peeper in Tryon was arrested early Tuesday morning after being suspected of looking in people’s windows in the Melrose Avenue of Tryon for almost a year.

Marlon Eugene Longshore, 21, of 21 Red Bird Road, Tryon, was arrested and charged with three counts of misdemeanor secret peeping, according to the Tryon Police Department.

The Tryon Police Department recently released surveillance of the suspect and asked for the public’s help in identifying him.

After obtaining warrants on Longshore on Monday, the department discovered the suspect was staying at the Days Inn in Columbus.

The Columbus Police Department attempted to issue the warrants to Longshore at the Days Inn Monday afternoon, and Longshore fled from officers, according to reports. Officers chased Longshore for about an hour and canvassed the area for another hour before the chase ended Monday.

Sometime during the early morning hours Tuesday, Longshore turned himself into the Polk County Sheriff’s Office, according to Bayne.

The Tryon Police Department released surveillance of the suspect on a porch of Melrose Circle captured on the night of Sunday, May 12.

The person captured was suspected to be the same suspicious person who had been trespassing through several properties in the Melrose Avenue area on and off since last August.

During a town council meeting in March, several residents spoke with commissioners and the mayor about their fears, with some women saying the young male had looked in their windows. Other surveillance pictures were put on social media earlier this year of a person and that sparked residents to come to the town council meeting to ask what was being done.

The suspicious activity was ongoing with the town receiving reports from last August into the fall months. The town did not receive any reports through the winter months, then reports began again this year. The reports stopped again following the town council meeting until the latest report where pictures and video were captured in May.

Longshore was released from jail Tuesday morning on a $1,500 bond and is scheduled to appear in Polk County District Court in June.

Columbus Police Chief Scott Hamby said his department will charge Longshore with resist, obstruct and delay for fleeing from officers.