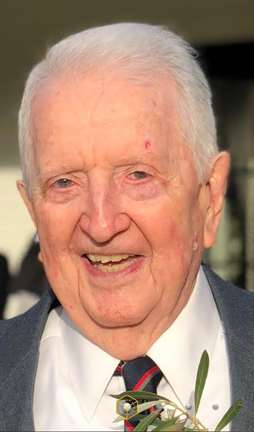 at his home. Born in Cherokee County, NC, he was the son of the late Felix Porter Meroney and Irene Twiggs Meroney. Following graduation from Murphy High School, he served in the U.S. Marine Corps.

After his service, he attended UNC Chapel Hill and graduated UNC School of Pharmacy.

In 1960, Carl and his wife Rebecca, purchased Columbus Pharmacy and operated the pharmacy for over 35 years. They quickly became active in the community, which they served for many years. Carl was a founder of the Booster’s Club at the high school and supported many local youth organizations. He was a founding member of the Columbus United Methodist Church and an avid Tar Heel fan. He was a very loving and devoted husband, father, brother and grandfather.In addition to his parents, he was preceded in death by his beloved wife, Rebecca Wallace Meroney who passed away in 1995; three sisters, Margaret M. Warner, Betty M. Haviland and Nancy M. Moore.

A funeral service will follow at 3:00 p.m. Wednesday in the McFarland Funeral Chapel with

Memorials may be made to the Polk County Community Foundation, 255 South Trade Street, Tryon, NC 28782 or a local charity of your choice.