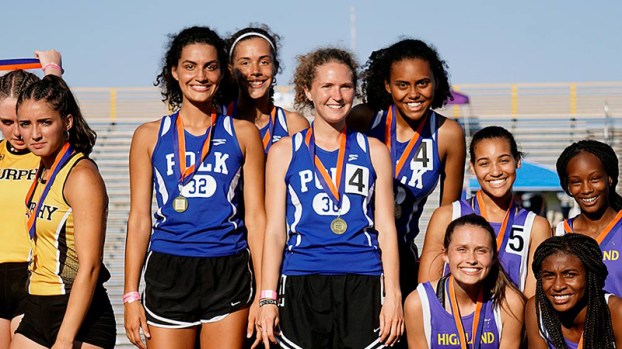 GREENSBORO – Mariah Overholt held her sister in a long embrace. Izzy Jackson stepped up and wrapped her arms around both.

The emotional finish-line scene at the end of Saturday’s 4×400-meter relay at the state 1A track and field championships intermingled the joy of winning a state title with the bittersweet sentiment of careers ending for the two Polk seniors.

The finish line, this time, was truly just that.

“It was good but emotional because it was our last race,” Overholt said.

“Wow, this is it,” Jackson said. “Four whole years of track are now over. It’s hard to think this is the last time I’ll run.”

For Overholt, Jackson and sophomore Marissa Twitty, it marked their second straight state championship in the event. Joining the trio this year was freshman Olivia Overholt, who ran a 58.69 last lap to ensure that the Wolverines would not lose the lead they had for the entire race.

“I wanted to win it with (Olivia),” she said. “It made everything more special. I’m really glad I could do this with my sister.”

The Overholts added a sibling connection to the race, but Jackson said the family feeling running throughout the team was much more than just that.

“The thing I’m going to miss the most about track is the team bonding,” Jackson said. “Every year, people have come together and we’ve been close.

“I wouldn’t want to run with anyone else other than these people.”

A parade was held on Thursday afternoon to celebrate the Landrum baseball team for winning the AA State Championship. This... read more