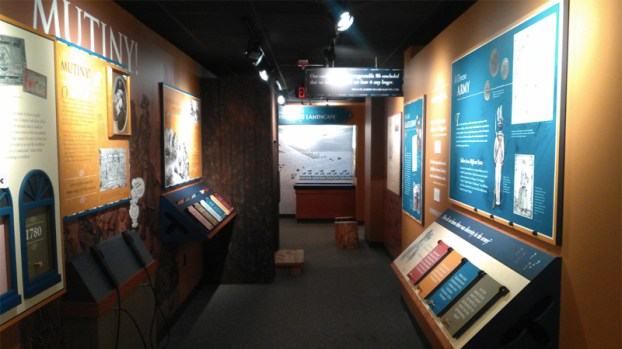 A display at the Washington Headquarters Museum National Park Service created by Capitol Museum Company. Their efficiency with linear space is what appealed to the Interim Museum Board. (Photo by Capitol Museum Services website)

The Landrum Rail and History Museum

The group began looking into developing the train car into a museum and quickly found that they would need help from professional museum designers and builders. The train car is roughly 850 square feet that is packed within a somewhat narrow space. The shape of the train car and the optimization of the linear space is what drove the Interim Museum Board to seek professional help.

Spokesperson Judy Henderson outlined some of the key points from the packet that they provided for the City Council members. Henderson said that there are four phases that go into creating a museum, story line development, design, build, and installation. The board found that many companies that do museum work do not do all four phases and they came to the conclusion that they should find a company that would handle all four phases of the project, as they believe it will be the most cost efficient method.

The company that the Museum Interim Board recommended to the City Council is Capitol Museum Company out of Manassas, Virginia. Capitol Museum Company has worked for several high profile museums and exhibits including; the Smithsonian, the Library of Congress, NASA, the National Park Service, and the U.S. Fish & Wildlife Service among others. Capitol handles all four phases of the process and includes additional services that the Interim Museum Board was originally unaware of.  The Interim Museum Board was impressed with the examples and museums that Capitol had created and how well they were able to efficiently use linear space. Capitol also created the Southern Railroad Museum at Norfolk, a project that is incredibly similar to what the group wants to do in Landrum.

The Interim Museum Board has received several rough estimates from multiple companies that charge per square foot. An additional cost that the museum presents is in regard to how the City wants to handle the asbestos inside the train car. The Interim Museum Board has been presented with two options on how to handle it, they can remove it or they can encapsulate it or a combination of the two. There is a significant difference in the cost of removal versus encapsulating the asbestos.

The Museum Interim Board approached the Landrum Council asking for funding to move forward with the project. The City Council have designated May 30 as the day that they will hold a budget workshop to review the city budget and plan for funding future projects.

To see more examples of Capitol’s work visit, www.capitolmuseumservices.com. The Landrum City Council will be holding the budget workshop on May 30 and will then approach the subject of the museum again in the June City Council meeting.

A Taste of Landrum Update