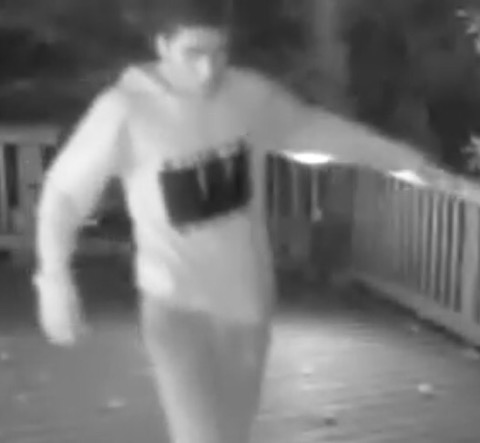 TRYON—The Tryon Police Department has photographs and video of a suspicious person entering a property on Melrose Circle Sunday night and is asking for the public’s help in identifying him.

The Town of Tryon publicized the surveillance Monday morning after the person trespassed onto property Sunday evening.

“The Tryon Police Department is requesting assistance from the community to identify a suspicious person trespassing at a residence last night on Melrose Circle,” town officials said.

The town is asking people to follow the Town of Tryon’s Facebook page to also see a video and any further updates.

The person captured Sunday night could be the same suspicious person who has been trespassing through several properties in the Melrose Avenue area on and off since last August.

During a town council meeting in March, several residents spoke with commissioners and the mayor about their fears, with some women saying the young male had looked in their windows. Other surveillance pictures were put on social media earlier this year of a person and that sparked residents to come to the town council meeting to ask what was being done.

The suspicious activity was ongoing with the town receiving reports from last August into the fall months. The town did not receive any reports through the winter months, then reports began again this year. The reports stopped again following the town council meeting until the report on Sunday night.

Some women told town council they had chased the suspect.

Tryon Police Chief Jeff Arrowood told residents in March to call the police when they see the suspect and not to try to apprehend him themselves.

Arrowood said his department has increased patrols in the area. Town officials also met with interested residents following the March meeting and discussed a community watch program, as well as giving residents tips about how to handle the situation if it occurs on their property.

The suspect is described as having a slim build, with the latest pictures showing dark hair, a sweatshirt and sweatpants. He is suspected to be in his late teens or early 20s.

Anyone with information to help identify the suspect is urged to call the Tryon Police Department at 8280859-9195.

City alerts residents of when construction is scheduled by street  SALUDA—The City of Saluda has announced a schedule of when... read more