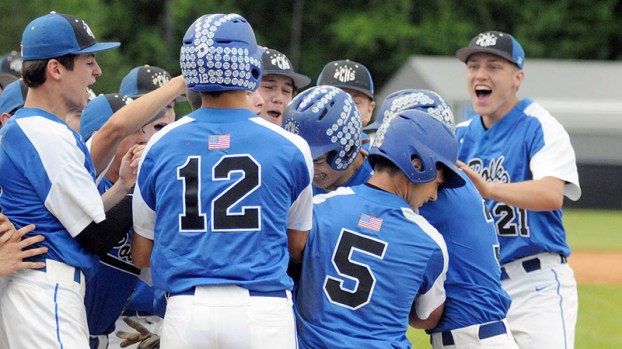 The Wolverines got two home runs from Nick Capozzi, one a grand slam, and pushed across the eventual winning run on a balk in defeating Pine Lake Prep 7-6 in the second round of the state 1A playoffs at The Bottoms.

For the second straight year, Polk County (18-4) advances to the third round, where the Wolverines will host Roxboro Community School on Tuesday. The Bulldogs (17-4) followed their playoff-opening win over Mitchell with a 4-2 upset of Rosman to reach Tuesday’s matchup.

The second of Capozzi’s blasts, the grand slam, helped Polk County break open a close game and gave the Wolverines a 6-1 lead after five innings. Polk made it 7-2 in the bottom of the sixth with what seemed a bonus run at the time, but proved to be the game-winner.

With two outs in the inning, Jordan Bishop on third and Kaleb Kropp on first, Kropp broke for second just as Pine Lake pitcher Owen Lally began his windup. Lally halted his motion, his foot still on the pitching rubber, and umpires signaled a balk, allowing Bishop to walk home.

That run became vital for the Wolverines in the top of the seventh as Pine Lake Prep (12-9) fought to keep its season alive. The Pride picked up one run on Grant Phillips’ double to deep center, then added three more on Connor Cingolani’s home run to left, and suddenly Polk County’s lead was reduced to one.

But senior Kyler Scruggs came on in relief and got the final two outs, the game ending on Elijah Sutton’s running catch of a shallow line drive in right-center.

“We knew they had a young kid on the mound (in the sixth). We ran our balk move, and it got us the run we needed.”

Pine Lake took a 1-0 lead in the first inning and made the edge stand until the fourth, when Capozzi opened the inning with a solo blast to left-center to even the game at 1-1.

Polk then took command in the fifth, loading the bases with one out on Kropp’s single, a Scruggs double down the left-field line and a walk to Evan Rimer. An error on Clark Phipps’ hard-hit grounder to short drove in one run before Capozzi hammered the first pitch he saw into the trees in center field, giving Polk a 6-1 edge.

“When he squares up, the ball flies off his bat,” Alm said of Capozzi. “I’m glad he’s on our side.”

Capozzi finished 2-for-3 with five RBI and Kropp added a 2-for-3 effort to lead Polk. Rimer, Sutton, Bishop and Scruggs each had one hit.

“Avery didn’t have his best stuff, but he competed,” Alm said. “We hit the ball well, but we hit it at them. We finally put together the big inning.”