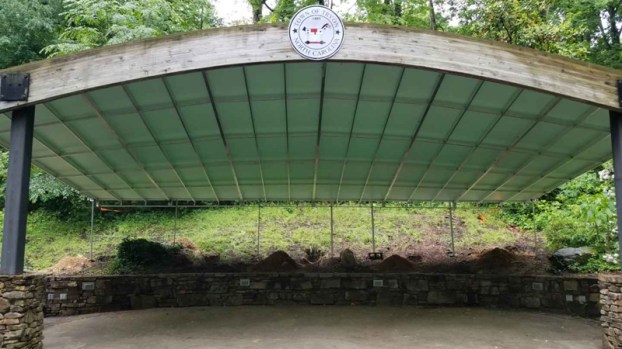 TRYON—On Thursday May 9, the All About Awnings crew began installing the hard covered roof on to the stage at Rogers Park. The previous canvas roof that had served the park well over the years was damaged during the winter storms of the 2018/2019 winter season. The old cover was made of a loose canvas material that was drawn into place and pulled taught by ropes and anchor points. The canvas roof had to be removed during the winter months and during extraneous weather conditions.

The new hard covered roof is a combination of metal framework and a canvas like material that will be more solid and secure than the previous cover. The new cover will be set permanently in place and will not need to be taken down seasonally.

The new hard cover is mounted to the back of the existing arch that spans the front of the stage at Rogers Park and will attach to posts and anchor points in the bank behind the stage. The All About Awnings crew hoped to have the roof completed by the end of the workday on Thursday, and then pour the concrete footers that will permanently secure the structure on Friday, weather permitting.

The metal framework of the new roof has a metallic silver cover, while the canvas material is a dark green that will blend into the surrounding landscape.

The first concert of the Summer Tracks at the amphitheater at Rogers Park will be held on June 14.   The first feature performance of the Summer Tracks series will be Ol’ 74 Jazz, an eighteen-member big band that plays Jazz and Swing music from Glenn Miller classics to pieces by Earth Wind & Fire.