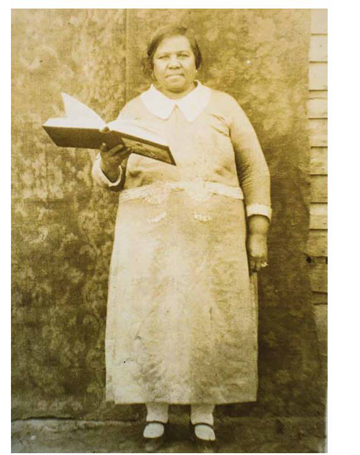 A photo of Madame Pheobia Cheek Sullivan holding a book. Sullivan was born in Lexington, SC and never learned to read or write. (Photo by the Historic Saluda Committee)

SALUDA—On Saturday May 11, the Historic Saluda Committee will feature the legacy of Madame Pheobia Cheek Sullivan as part of their “Step Back in History” series. The presentation will begin at 10:00 a.m. at the Saluda Center.

Maxine Wilkerson will be presenting the program that outlines Sullivan’s life as a healer, herb doctor, mystic, prophet, and leader in Saluda’s black community in the early to mid twentieth century. Sullivan’s greatest claim to fame was founding Sullivan’s Temple Missionary Church in 1948.

The Temple was at one time a gathering place for whites and blacks in the community to gather and celebrate musical festivities and parties. Some legendary gospel singers that performed at the Temple include, Mahalia Jackson, Sister Rosetta Tharpe, and possibly even Sam Cooke’s Soul Stirrers. Historians from the Saluda community say that it is part of the town history and lore that bus loads of people would come from all around the United States to see Sullivan to get a first hand look at her healing powers.

The Historic Saluda Committee is an official committee under the jurisdiction of the city of Saluda working to preserve the history of Saluda. The Committee will be discussing the plans that they have with the Saluda Community Land Trust for the property as part of the legacy of Madame Pheobia Cheek Sullivan event.

For more information about the Historic Saluda Committee and to find a brief biography on Madame Pheobia Cheek Sullivan go to www.historicsaluda.org or contact them at historicsaluda@gmail.com.