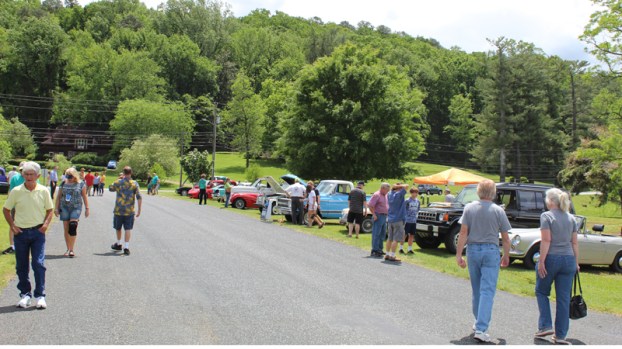 On Sunday May 5, the Tryon Seventh-day Adventist Church hosted a free to enter and free to attend car show. The event ran from 1:00 p.m. to 4:00 p.m. with competitors ranging from the Western North Carolina and Upper South Carolina areas. (Photo by Sam Robinson/Tryon Daily Bulletin)

TRYON—On Sunday May 5, John Earnhardt and the Tryon Seven-day Adventist Church hosted a free public car show. Early morning rain and storms threatened the event but just shortly before 1:00 p.m. when the event was scheduled to start, the clouds broke and the sun shined through.

The weather did prevent Earnhardt from bringing one of his famed vehicles, the Chevy V8 Trike. However, Earnhardt did follow through in bringing his 1956 Micro Midget, the same vehicle that he grew up racing. Earnhardt said that he raced the Micro Midget circuit when he was around the age of 13. Earnhardt also said that the Micro Midget could hit speeds up to 70 miles per hour on a good straight away. Growing up in a racing family clearly played a huge part in John Earnhardt’s early development and love for the sport.

“This is the first time that we have done this, I think this is the first time any church in Tryon has done something like this,” Representatives of the Tryon Seventh-day Adventist Church (TSAC) said. “ We saw how big the car show in Landrum is getting and we wanted to do that here in Tryon. We want to continue doing this in the future and hope we can grow.”

“This show is a good representation of what the event could become in the future, we have a great guest speaker (referencing John Earnhardt) and a lot of public interest,” TSAC representatives said. The Tryon Seventh-day Adventist Church is located at 2820 Lynn Road, just past Harmon Field heading towards Columbus. The church has very high visibility from the main road and attracted many visitors that had not previously heard about the car show.

The event also had a live band and free food in addition to the classic cars and trucks; the weather did however deter all but two motorcycles from attending.

Representatives of TSAC said that they wanted the event to be more about having fun and getting the community involved rather than the actual competition or choosing a “best” car. Every participant got an autographed 8×10 photograph (Earnhardt supplied various signed photographs of NASCAR drivers and crew). There were four big prizes that Earnhardt and TSAC representatives gave to competitors, they were large signed and framed photographs of the Earnhardt racing family. An estimated 20 cars and trucks of all different ages entered, as well as two motorcycles. TSAC representatives said that they are pleased with the turn out considering the weather and hope to see the event grow in size in the future.