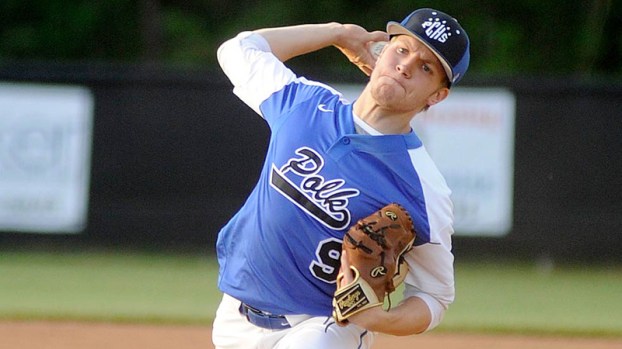 Sutton sprints home to give Polk showdown win over Madison

The moment arrived, 90 feet of dirt and opportunity at Elijah Sutton’s feet.

No time, certainly, for hesitation. Or the opinion of others.

“I took off in an instant,” Sutton said. “Coach didn’t say anything. If he did, I didn’t hear it.”

Seconds later, finger pointed to the sky, Sutton crossed home plate at The Bottoms with the winning run in Polk County’s Western Highlands Conference showdown with Madison, the walk-off wild pitch in the bottom of the eighth giving the Wolverines a heartstopping 4-3 win.

It also earned Polk County first place in the WHC. The Wolverines (14-4, 11-1) now lead Madison (13-7, 12-2) by a game, but must win two games Wednesday at Mountain Heritage to set up a title-deciding clash on Friday evening at Madison.

That the Wolverines have that chance came courtesy of a wild sequence of events in the sixth, seventh and top of the eighth innings which left Polk elated, then dejected, then determined as the bottom of the eighth arrived.

Sutton opened it with a single to center. Grayson Jones then pushed a perfect bunt down the first-base line. As Madison pitcher Joseph Rice reached the ball, rolling just inside the foul line, he slipped and fell. Jones reached first, and Sutton quietly took advantage of the chaos and raced to third.

Soon he was home, crossing the plate standing, a fitting ending reminiscent of the teams’ first meeting earlier this season when Madison also earned a one-run win on the game’s final play, though that one a Wolverine out at the very same home plate.

It also couldn’t have been more appropriate that Sutton, a senior on Senior Night, scored the winning run in the team’s final regular-season home game in a year that began with a devastating knee injury in Polk County’s football season opener.

“I worked my butt off for baseball so that I could make things happen,” Sutton said.

Things, so many things, happened as a sunny afternoon turned to evening.

Both teams had multiple scoring opportunities throughout the game, but the two starting pitchers, Madison’s Kannan Coates and Polk’s Avery Edwards, worked out of nearly all, the teams entering the bottom of the sixth knotted at one.

Rice entered in the sixth and retired the first two batters before Polk’s Kaleb Kropp and Kyler Scruggs drew walks. That brought senior Evan Rimer, perhaps the team’s hottest hitter of late, to the plate, where he drilled a pitch to the wall in left-center. Kropp scored from second, Scruggs raced around and scored from first on a headfirst slide and the Wolverines had a 3-1 advantage.

Edwards struck out the first batter in the top of the seventh, then walked the next before leaving the game, nearing the mandated pitch count limit, to hugs and an ovation. Jordan Searcy entered and retired his first batter as Jones made a sliding catch in right.

But everything went awry at that point for the Wolverines as two errors, errant throws on back-to-back infielder grounders, allowed two Madison runners to score, evening the game at 3-3.

A defensive gem in the top of the eighth helped preserve the tie. With one out and runners on first and second, Macean Metcalf laced a single to right. Jones fielded the hit and fired a strike to home, where catcher Sedrick Pickett snared the throw and tagged a sliding Coates. The out signal went up, much to Madison’s dismay, and Searcy got a fly ball to Jones to end the inning.

“Everybody came out battling in a must-win game,” said Polk County head coach Billy Alm. “Avery Edwards, he pitched the best game he’s had since he’s been at Polk County against a great Madison team. He was impressive in getting out of some big innings.

“We battled at the plate. Evan Rimer came out and got the big hit, then we had the mishaps in the seventh. But senior Elijah Sutton got a huge hit, Grayson had a huge bunt single and Elijah read the ball and moved around, then the passed ball stuck in the net. You can’t win any better than that.”

Polk grabbed a 1-0 lead in the first as Rimer singled, stole second, moved to third on a wild pitch and scored on Nick Capozzi’s grounder.

Edwards escaped a two-on, one-out jam in the third with back-to-back strikeouts, then helped himself out of another sticky situation in the fourth, picking a runner off first with one out and another runner in third, then notching a strikeout for the third out of the inning.

Polk loaded the bases with one out in the bottom of the fourth and failed to score, and Madison loaded them with no outs in the top of the fifth. But Edwards induced a double play, which did allow the Patriots to score one run, and the Wolverines escaped more damage after Pickett chased down a wild pitch and tagged Madison’s Ransom Boone out at home as he tried to score.

Polk again loaded the bases with one out in the fifth, but again failed to score. Soon the late drama began.

Rimer finished 2-for-3 with two RBI to lead Polk, which had just four hits, the others coming from Sutton and Jones in the eighth. Polk did draw seven walks and left six runners on base. Madison had eight hits, also garnered seven walks and stranded 11 runners, plus had two retired at home.

Scruggs tossed four pitches in the top of the eight and earned the win.

Polk County got a much-needed jolt Monday from a very-familiar source – its seniors.  Ansley Lynch and Morgan Stott ensured the... read more