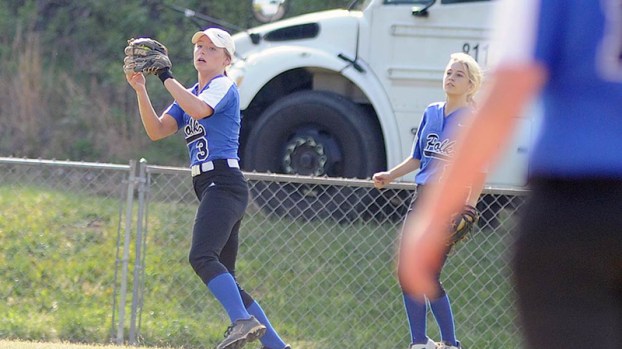 Polk County got a much-needed jolt Monday from a very-familiar source – its seniors.

Ansley Lynch and Morgan Stott ensured the Wolverines’ Senior Day would a happy one, delivering key fourth-inning hits that sparked a seven-run rally and carried Polk to a 15-5, six-inning win over Mitchell.

With the win, the Wolverines tuned up for a matchup Tuesday at Western Highlands Conference leader Madison and improved to 10-6, 9-3. Mitchell dropped to 0-15, 0-12.

But don’t let the record be misleading – the Mountaineers are an improving team and rattled Polk County early, scoring twice in the first inning, once in the second and twice in the fourth to grab a 5-2 lead at that point.

The Wolverines, though, began to rally with two outs in the fourth. Jessie Emory singled to start the comeback, moving to third on an error, and scoring on Anna Hodge’s infield single. Allie Thompson drew a walk and Anna McFadden was hit by a pitch to load the bases.

Stott powered a line drive down the third-base line that hit the bag and bounced into the outfield, allowing two runs to score. Lynch followed with a double that plated McFadden and Stott to give the Wolverines a 7-5 edge.

Alana Jergenson laced a base hit to drive in Lynch, then stole second before scoring on Jaylin Jackson’s single to give Polk a 9-5 advantage.

“It was good to see the seniors get big hits in the comeback inning,” said Polk County head coach Jamie Thompson. “We didn’t start out great. Senior Night was kind of a distraction, but that’s part of the deal. The girls put in a lot of work to get things ready.

“We finally got into a groove and were able to play like we’re capable of doing. We finally started hitting the ball like we can.”

Polk upped the lead to 10-5 in the fifth on a McFadden RBI double, then pushed across five runs in the bottom of the sixth to close out the game. Jergenson opened the inning with a double and Jackson, Emily Prince and Kaylin Jenkins had singles before McFadden ripped a two-run single into the right-field corner to end the game.

Hodge came on to pitch in the fourth and, after allowing three hits, retired the final seven batters in order to shut down Mitchell’s offense.