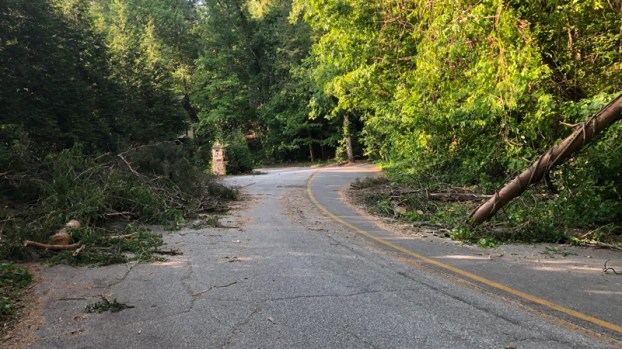 High winds on Friday caused several trees to fall in the area. Gusts were up to 35 mph and some trees fell on power lines. Pictured is a tree that fell along East Lakeshore Drive of Lake Lanier, that was still blocking parts of the road as of Sunday evening. (Photo by Leah Justice/Tryon Daily Bulletin)

Friday wind gusts cause many trees down

One man injured when tree fell while he was on tractor

GREEN CREEK—The area saw high winds on Friday afternoon and with the wet conditions this season, many trees came down, one injuring a man.

Officials responded to a tree that fell in Green Creek and injured a man on a farm tractor.

The tree did not fall directly on the man, according to reports, but he was injured when it fell. The tree fell around 4 p.m. Friday. The man was transported to Spartanburg Regional Medical Center. His exact injuries were unknown as of press time.

Polk County Fire Marshal Bobby Arledge said Friday’s winds got as high as 35 mph gusts and with the rainfall the area has seen lately, tons of trees fell all over the county.

“There were a ton of trees down,” Arledge said on Monday. “Several had power lines involved so there were a handful of power outages.”

April has already seen 4.4 inches of rain, according to the National Weather Service.

March received 5.76 inches of rain, according to the NWS. The normal for March and April are 5.76 inches and 4.58 inches respectively, so the last two months have seen just under normal rainfall.

Polk Middle duo glides to a title at Science Olympiad