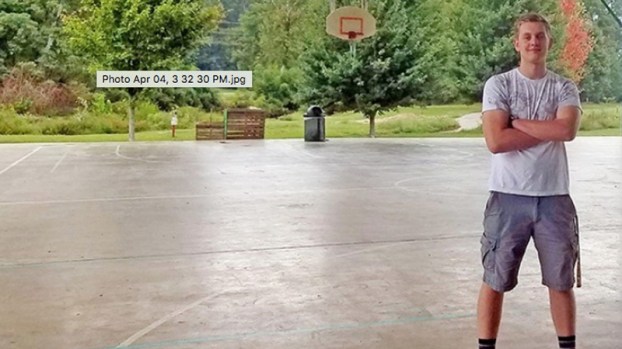 Mason Lassiter’s vision of renovating the open-air gym at Harmon Field is continuing after he passed away on April 10. Family and friends are continuing to raise money for the upgrades in his memory after the 17-year-old raised almost $11,000 for the project.

TRYON—Mason Lassiter, 17, had a vision for the basketball courts at Harmon Field for them to be a safe and inviting place for people to play.

He decided last year, as a junior at the Polk County Early College, to raise money and renovate the courts for his senior project next year.

After working to raise almost $11,000 for the project, Lassiter passed away on April 10.

Now his family and friends want to continue his vision and renovate the courts in his memory.

Mason, who lived in Tryon and played on the courts at Harmon Field was raising money to resurface the floor, replace the goals, add some benches and a water fountain and have a mural painted there.

“Tryon should have a basketball court that is safe and appealing for everybody,” Mason said on a GoFundMe page to raise money. “Together, we can all have a part in helping make sure this small part of our beautiful town lives up to its beautiful reputation.”

Mason’s dad, Matt Lassiter, said the community has really embraced his son’s project over the last year. He said people have already talked to him about picking up the project and one anonymous donor since Mason’s death has pledged to match up to $15,000 in donations during the months of May and June. The donor had previously spoke with Mason about matching donations up to $10,000, but the donor increased the pledge this week.

“If Mason could see this, the kid would be overjoyed,” Matt Lassiter said. “He loved to help people and wanted to get this done. He wanted this to be a nice, safe, inviting place for people to play basketball.”

Mason Lassiter approached the Harmon Field Board of Supervisors last September, with the board welcoming his project. Mason said at the time his senior project should benefit the community. He planned to replace the floor and basketball goals, add a trashcan and water fountain, benches and to have a mural painted that represented Tryon. Mason played basketball there frequently the past eight years and said the courts lacked luster and people rarely played there because the goals are broken and none of them have nets.

After receiving estimates on the renovations, Mason was trying to raise $40,000.

Mason raised since late last year $10,945, including major donations from the Tryon International Equestrian Center ($5,000), the Harmon Field Board of Supervisors ($3,000), the Tryon Riding and Hunt Club ($1,000) and the Tryon Rotary Club ($1,000). Other donations have come from his GoFundMe page.

“Mason was like me,” Matt Lassiter said. “He was my boy. I miss him like crazy. He was my best friend.”

Matt Lassiter said he really hopes his son’s project can be finished and he would love to see Mason’s name on something at the new gym.

“The reason it’s getting done still comes back to him,” Matt Lassiter said. “He really took the bull by the horns.”

For more information, to help with the project or to make a private donation, contact Matt Lassiter at matt.lassiter1@gmail.com by putting “Harmon Field” in the subject line.

U.S. 74 ramp to I-26 to be complete the end of May  COLUMBUS—Drivers have probably noticed in the last few... read more