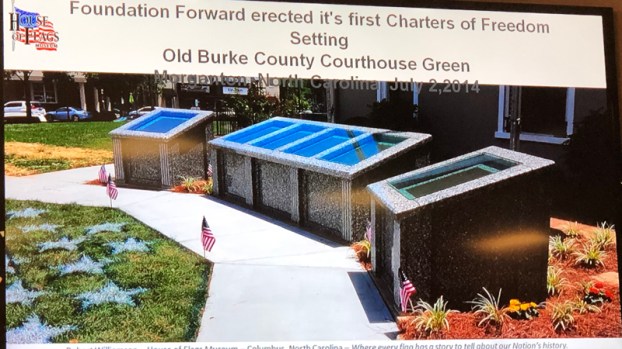 Columbus Councilman says groundbreaking could happen in May or June

COLUMBUS—A project to install the Charters of Freedom at Columbus’ Veterans Park is moving quickly with the groundbreaking tentatively planned for May or June.

Columbus Town Council met Thursday and heard from councilman Robert Williamson, who is helping with the project.

The Charters of Freedom are being donated to the county by the Foundation Forward Inc. and are displays of the Declaration of Independence, the U.S. Constitution and the Bill of Rights. The county and Columbus decided to have them placed in Veterans Park, near downtown Columbus, after the location was recommended by the Polk County Appearance Commission.

Williamson said there is a list of approximately 35 potential volunteers to serve on the steering committee. He said he spoke with Foundation Forward Wednesday night and they were ready to have the groundbreaking next week. He said it’s time to get the community involved in this project. Williamson spoke of the time capsule that will be included in the project. He said he is trying to get the towns, service organizations and the school district involved.

Williamson asked for Columbus to approve Discover Columbus spending up to $250 on a lunch for the committee of 35 people. He said the lunch may happen before the town’s next meeting in May. Council approved the expenditure of up to $250 for the lunch.

Williamson also said he’s heard the rock has been donated for the Charters of Freedom project and the concrete has been donated. Officials are still hoping the lumber for the project will be donated.