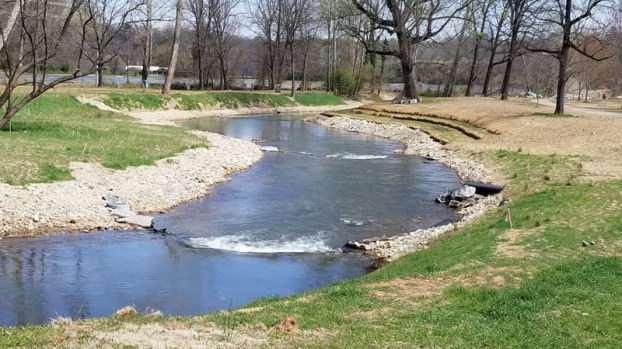 TRYON—The stream restoration project at Harmon Field broke ground in August of 2018, but the initially proposal and grant application began back in 2014. Quible & Associates, P.C. have been involved with the Town of Tryon in every step of the project.

Joel Lenk is the project manager from Quible that has been the lead on the Harmon Field stream restoration project. Lenk is the North Carolina Branch Project Manager and head of daily operations for Quible in WNC. Quible and Associates, P.C. is the same company contracted by the Town of Tryon previously in regards to the Lake Lanier Dam. Quible produced Emergency Action Plans for both the South Carolina Department of Health and Environmental Control (DHEC) and the North Carolina Department of Environmental Quality (NC DEQ) for the Lake Lanier Dam in Tryon.

In addition to a Geology degree from East Carolina University, Lenk has extensive experience working in mountain and piedmont riverine environments, and is well versed with State and Federal law and policy associated with stream systems, wetlands, and groundwater. Lenk is a professional licensed geologist in North Carolina with 15 years of experience working as an environmental consultant.

The project is multifaceted and required approval from FEMA, USACE and North Carolina Department of Environmental Quality.  “The grant (NC Division of Water Resources, Water Resource Development Grant (NC WRD Grant)) was applied for in December of 2014, and awarded in October of 2015,” Lenk said. “Assessment, Design and Permitting took place between 2016 and 2017.  Construction began in August of 2018.”

The project was proposed to FEMA as NC-18-609-Proposed Harmon Field Stream Restoration at North Pacolet River. The Town of Tryon received $165,000 in October of 2015 for the project from the North Carolina Division of Water Resources in the form of a Water Resource Development Grant. A stipulation of the grant requires the Town of Tryon to match the amount of State funds with equipment, labor, donations, and the value of about 4.6 acres of land closest to the river where the project took place. Lenk was involved in the grant application process as well as working out the stipulations allowing the Town of Tryon to match the grant amount through those resources. The 4.6acres of land required by the grant will be placed into a deed restriction by the Town of Tryon.

The Harmon Field Pacolet River Restoration project offers many benefits to the community and to the State.

“The short term and long term benefits (of the project) are similar.  I discuss these below, but first, I think it is important to point out that the North Pacolet River (not just within the area of Harmon Field) and many other streams in Polk County and North Carolina have been negatively impacted by development.” Lenk said.  “Anthropogenic effects extend to the natural world we all are a part of (water quality, ecology and morphology which are all highly related) and typically lead to degraded water quality, property damage and other well documented and adverse impacts.”

“Many Towns and Counties have implemented Stormwater Ordinances to help mitigate impacts to our environment resulting from development.  These ordinances usually attempt to limit the amount or volume of runoff being released from developed sites to pre-development runoff volumes,” Lenk said. “Neither Polk County nor Tryon have a Stormwater Ordinance that addresses runoff from development. As development occurs the hydrology of a watershed changes and becomes more impervious, meaning that less water sinks into the ground and more water runs off the land and flows directly to streams and rivers at velocities that not only degrade the water quality in the stream (caused from suspended sediments and pollutants) but cause physical damage to property by erosion.”

“Generally, increased runoff results in higher and more powerful flows that overwhelm the natural stream morphology and ecology,” Lenk said. “As the landscape responds to the developed landscape, banks erode, new areas are flooded, and the aquatic, riparian and human environment suffers to adapt to the fast change.  This is not to say that streams and rivers do not flood and erode without human intervention.”

Lenk believes that the North Pacolet River within Harmon Field is a classic example of what happens to a river when it is forced to accommodate higher and more frequent peak flows as a result of development in the watershed, changes in climatic conditions and natural riparian buffers are removed. Many residents can recall the frequent flooding and rapidly eroding banks that caused a cliff like conditions at the park. Lenk also notes that the quality of the river as a whole decreases in those conditions resulting in reduced fish and ecology in the river as a whole.

Lenk also hits on a few of the immediate impacts that the community will see after the completion of this project.

An immediate change that patrons will notice is the reshaping of the banks along the Pacolet River. The banks of the river were eroding away in many areas creating cliff like drops into the river. The Pacolet River Restoration Project focused on repairing the banks and creating a more sustainable and natural transition into the river. The banks have been reshaped into more gentle slopes, or into multi tiered shelves that will be much more sustainable in the future and prevent land loss from flooding. In addition to the reshaping of the banks, rock veins have been introduced in several sections of the river to divert water away from the banks. The rock veins do more than just divert water flow, they also help oxygenate the river promoting fish and aquatic habitat.

Another new feature that Harmon Field patrons can look forward to are the new rain gardens. Tryon Town Manager Zach Ollis outlined the need and benefits that they would bring to Harmon Field. The rain gardens are additions to the existing drainage system around the surrounding fields that drain into the river.

“We have created these rain gardens around the drains that used to be at ground level. The old drains were meant to drain the water off of the fields and into the river,” Ollis said. “The problem with that system is that the water immediately went into the river at a rapid rate and dumped whatever chemicals or fertilizers directly into the river.”

To prevent the fertilizers and other substrates from getting into the river, bowls have been dug around the drains. The bowls catch the run off water, promote infiltration and allow pollutants to naturally be broken down in the soil and by the wild vegetation that will grow in the bowls once the project is complete. The bowls will also prevent the water from being able to enter into the river at such a rapid rate, only during extremely heavy rain or snowfall are the drains expected to divert water into the river. The term rain garden is used because during the summer the bowls will grow natural wild flowers and other vegetation that will sustain itself with the excess water that will be diverted into the bowls.

To solidify the newly reshaped banks, natural vegetation will be planted and encouraged to take root into the new soil to solidify it. This is a crucial phase in the project and can take several years to become fully established.

“Establishing high quality riparian vegetation can be somewhat challenging, and take some time to become established (2-3 years),” Lenk said. “It will be important for the public to be patient while the vegetation takes root and to be sensitive to and observe areas of high stress and preferred access points to the river.  If this can be accomplished the reward will be an amazing variety of native wild flowers and plants to enjoy as they visit Harmon Field.”

The majority of the project is expected to be completed in early May of this year with maintenance and improvements continuing as long as possible.

Ollis provided a general synopsis of the project and what he expects it to do for the community. “We hope to see less impact from flooding and hope to lose less land from flooding with these changes. We hope to have a more stable river that comes through the heart of the park,” Ollis said. “There is a clear visual aesthetic benefit, especially at Hogs’ Heaven, you can clearly see that aesthetic change as a lot of the excess and non-native species were removed and it now allows for an uninterrupted view across the river.”

“There has been a lot of hard work put into this project. It has been a good project but a tough one,” Ollis said. “I think at the end of the day everyone in the community will be happy with it. This has definitely been one of the coolest projects that I have been able to be a part of.”

The Cyclepaths of Tryon Estates