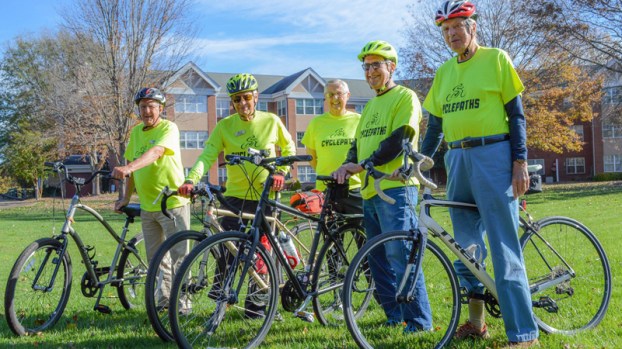 The Cyclepaths of Tryon Estates

Tryon Estates residents show that age is just a number

COLUMBUS—On Wednesday mornings Columbus residents can spot a group of cyclists that don’t look like your typical bunch. Tryon Estates resident and founder of the Cyclepaths, John Mifflin, organized a group of about seven residents after noticing all of the bikes parked outside the residents’ buildings and the group has been riding ever since.

Mifflin is the founder and oldest member of the group at the ripe young age of 94. The group has a range of ages with the youngest member at 69. The cyclists meet outside of “B” building just after 9 a.m. and decide on their route before setting off at 9:30 a.m.

Cyclist Hunter Coleman is filling in for John Mifflin as organizer and pacesetter due to some health issues that have forced Mifflin to step aside temporarily.

When Coleman started riding with the Cyclepaths he said his biggest challenge was riding from the community gate to the top of the mountain on Peniel Road. The group is incredibly supportive of one another and they don’t try to push anyone too hard. Coleman wants to emphasize that they ride for fun not to compete with one another or race. Each member has their own motivations and reasons for wanting to cycle, but Coleman said that one of his favorite parts about riding is just getting to see the beautiful sights of Columbus and experience the freshness of being outside in the open.

The group calls their riding routes trails, although they are on the roads.

“We have trails all over. If you don’t know, Tryon Estates is just off of Peniel. We like to go off Peniel onto Laurel Lake and go out and around the backside of Columbus,” Coleman said. “The last ride we did on that route was about a 15-mile loop that started and ended at Tryon Estates.”

The group decides what route they want to take and how many miles they want to go before setting off in the mornings.

“On a good day we have about seven members,” Coleman said. “We ride some routes that are only like 7-to– 8 miles long that go through Morgan Chapel and hit on Hayes. We really love getting onto Hayes, it’s a good climb and a good decent. We can hit speeds up to 30 mph going down it.”

The Cyclepaths call that shorter ride the “little mountain route” and frequently take that trail.

Coleman said that there are obvious benefits to cycling because it is exercise and it is good for your health, but also for building that sense of community and getting to make new friends. Coleman also joked that dodging the traffic and cars on the roadways is part of the adventure.

The group recently switched to their new ride time at 9:30 a.m. because of the shift into the summer season.

“We have taken two rides on the Swamp Rabbit Trial already, we want to go ride the Rails to Trials route in Spindale and go visit some places in Hendersonville in the future,” Coleman said. “The joy of being retired is getting to do what you want, when you want.”

That freedom is what gives the Cyclepaths the freedom to cycle in the best times of day and for as long or short of a ride as they want.

The Cyclepaths encourage new riders and want the group to remain as open as possible to other residents.

“I always say that Tryon Estates is just a big house with one big family,” Coleman said. ‘This is a great community and place to be.”