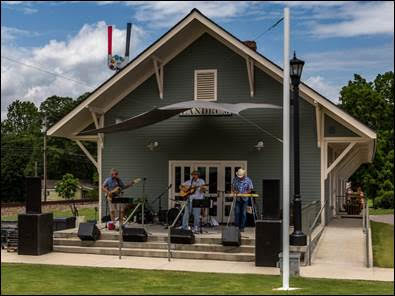 Landrum Mayor Bob Briggs and the Landrum City Council announced that last week the City of Landrum made the final payment on the city’s 2012 Bond. The $300,000 bond was issued in 2012 for the design, planning, engineering and improvements to city’s historic Depot. The last of six annual payments of $46,054 was fully paid by the City’s Hospitality Tax Fund.

Mayor Briggs emphasized “thanks to the Hospitality Tax, no property taxes were used for the Depot renovation project.” The city adopted the local Hospitality Tax of 2% in 2008 on the gross proceeds of the sale of prepared meals and beverages in establishments within the City of Landrum. He added “The continued growth of the number of visitors to Landrum is a major contributor to the city’s Hospitality tax receipts”.

“The restored Landrum Depot has been a great success to Landrum residents and area groups in surrounding communities who routinely rent the Depot for a wide range of civic and special events. The Depot is rented more than 50% of the days of the year, including almost every weekend!” Income from persons and groups renting the Depot will exceed $15,000 this year and is used for the on-going maintenance of the historic Depot.

– Submitted by Landrum Board of Trustees

Big Brothers Big Sisters is now enrolling children ages 6-14 in their Community-Based program. The organization will have a presentation... read more