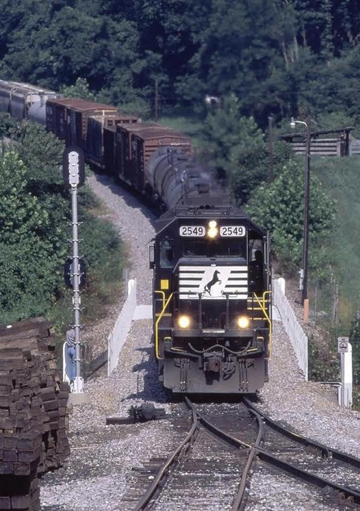 I am guessing that not many folks consider the Blue Ridge Mountains to be a near constantly slippery, tall castle of steeply planted and yet incredibly fragile rocks. With just a hint of a rainstorm, it quickly begins the mountain’s horizontal underground dance that often opens wide, gaping holes or creates huge mountain slides which neither the world’s bravest mountain goats nor American railroads particularly enjoy or covet,” exclaims railroad historian, Bob Loehne.

That’s how Bob Loehne will get your attention on Friday, April 19 at Saluda Train Tales. According to Bob, the mountain goats gave up on the Blue Ridge and headed west, but the railroads, either for the big money or the love of washed out mainlines, chose to stick around. During Saluda Train Tales we will take a close look at three slippery and downright terrific mountain railroad grades.

These three mountain routes were recognized as personal and business necessities, especially to connect with Raleigh, South Carolina and Ohio, and of course coal, too.

Bob will describe to the audience the distinctions between the three railroad grades and why they are significant to railroad history.

The first grade was eventually called Southern Loops, or more simply “The Loops.” It was and still is an extraordinary cantankerous, 2.5% climbing, twisting, tunneling, and tight turning apparatus for climbing a steep mountain.

Clinchfield Loops, the third Blue Ridge grade was built around 1913 and turned out to be a smooth climb of grandeur, design excellence and architectural beauty … the benefits of a 30-year learning curve from when our first two great grades were developed.

Saluda Train Tales is a free monthly event to educate the community in the importance of Saluda’s railroad history and the Saluda Grade. These events are at the Saluda Historic Depot, 32 W Main Street, Saluda, NC 28773. Presentation is 7:00 p.m. to 8:30 p.m. The events are free. Saluda Train Tales is sponsored by the Polk County Community Foundation.

The 14th Annual PCHS Athletic Fundraiser golf tournament will be held May 23 at Links O’Tryon in Campobello.  The tournament, which benefits... read more