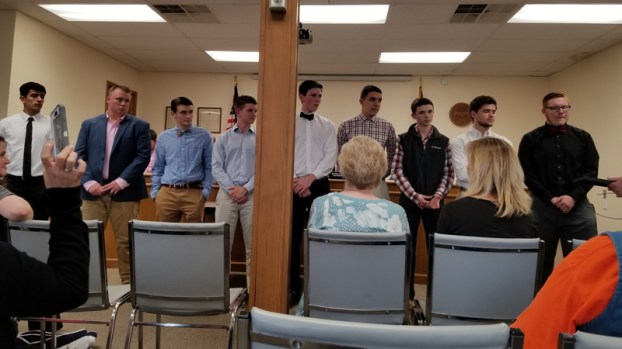 LANDRUM—On Tuesday April 9, the Landrum High School Strength Team received a certificate of recognition from the Landrum City Council. Mayor Robert B. Briggs presented coach Chad Cooksey with a certificate from the city recognizing the young men and coaching staff for all of their hard work and efforts.

Coach Cooksey accepted the certificate and spoke a few words of praise for his athletes and their efforts.

“We have actually finished in second place the last two years (at the State Championship) and that’s always tough. It’s good to see these young men win this competition,” Cooksey said. “Especially for the seniors that get to go out on a win.”

“The way that our State Tournament works is that it’s a competition 1-5A where they score the teams as a whole. We are competing against everybody in the state.”

The State Championship is similar to the way that wrestling meets are scored. The individuals compete in a certain weight class against other competitors and the results are tallied together for a total team score.

Cooksey also praised the team for their individual efforts, “We had two individuals that won outright at the State Championship in their weight classes.”

Coach Cooksey is a vital asset to Landrum High School for his work with the Strength Team as well as what he does for the other athletic programs at Landrum during their weight training sessions. In 2016, Cooksey won the South Carolina Association for Physical Education and Sports Teacher of the Year Award at the High School Physical Education Level.