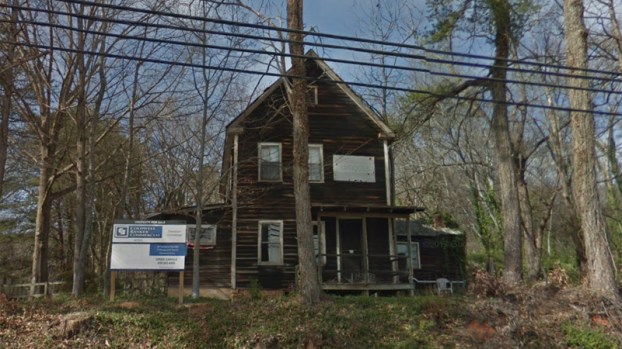 COLUMBUS—Blue Water Pool and Spas will move into a new location in downtown Columbus. The property that they purchased above Calvert’s in downtown had an old house that was previously used as an antique store.

The original intention of Blue Water Pool and Spas was to salvage and repair the house but after further inspection they decided that the structure was beyond repair and had it torn down. The house was previously used as an antique store but had sat unused for a number of years.

General Manager of Blue Water Pool and Spas, Kevin Clinton, said that they really wanted to preserve some of the old building because they believed it was one of the oldest houses in Columbus.

“We found that the house was not going to be able to be saved after inspecting the property. It had severe termite damage and needed to be condemned,” Clinton said. “We did salvage some things from the house including old newspapers from the 1930s that were inside the walls being used as insulation. We plan on putting a small display up using those old newspapers, and commemorating the house with the help from the families that lived there and in the area.”

In addition to salvaging materials from the previous structure, Blue Water Pool and Spas also wanted to reuse or keep as much of the existing vegetation as possible. Blue Water employees have done most of the grading work and clearing of the property themselves. By doing it that way, they were able to be more selective on how to treat the property and limit the amount of trees being removed.

“We had several very large, old trees that we were able to save. A lot of the lumber that was cleared for the new building will be used to make the new counters inside the new building,” Clinton said.

The property was already a part of the downtown commercial district and did not have to be rezoned to accommodate Blue Water Pool and Spas. The property is officially listed by the Polk County GIS as a 0.95-acre lot at 32 N. Peak Street.

One of the biggest challenges to the project was the heavy rain that Polk County has experienced.

“We have really had a challenge with all the recent rain,” said Clinton. “We have fell back almost three months from our original schedule because the rain makes it difficult to clear the land and proceed with construction.”

Clinton also said that over time Blue Water Pool and Spas will change the outside of the new building to look more like a cabin or a more natural part of the downtown area.

Get ready to see some powerful acting as Tara Sweeney plays Judy in “The Curious Incident of the Dog in the Night-time”. Written by Simon... read more