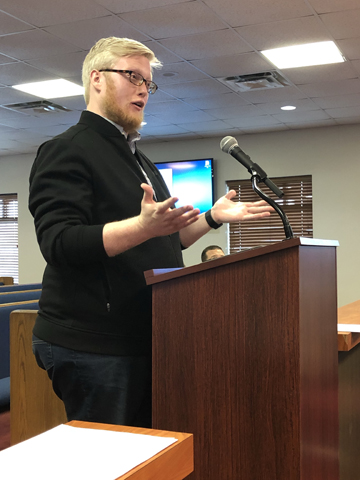 COLUMBUS—After the area experienced a total outage with Verizon and Charter services Thursday afternoon and evening, residents likely have broadband services on their minds.

That topic came up during Polk County’s meeting on Monday.

During citizen comments, commissioners heard from resident Justin Wallace, who spoke of Windstream’s recent announcement that it is filing for Chapter 11 bankruptcy in the southern District of New York.

Wallace told commissioners for far too long Windstream has held a monopoly on broadband Internet for county residents.

“While we cannot know for certain what the outcome of this Chapter 11 reorganization will entail, an educated guesser can surmise there will be no continued investment in rural broadband, to the detriment of Polk County consumers,” Wallace said.

Wallace also said he relies on high-speed internet access for income and he is astonished at the lack of investment in DSL infrastructure. He said he has long feared the day when Windstream would simply exit the rural market to avoid infrastructure investment.

Polk County Commissioner Jake Johnson said one thing the county has done about broadband services is conduct a survey and he guesses that the companies did not see enough business.

County Manager Marche Pittman said the board of commissioners last month changed its tower ordinance to allow for public benefit.

“This is a very frustrating issue,” Pittman said. “I get phone calls at least twice a month from Windstream customers. It has caused the board to take a look at it. That’s the direction we are going in.”

Pittman said at this point, North Carolina has a law where a county cannot get into the Internet business. He said the state is hoping to change that this year and it may be time for residents to reach out to legislators.

During commissioner comments, most commissioners spoke of the issues with broadband service in the county.

Commissioner Ray Gasperson said our future is clearly wireless broadband in a small county and Polk commissioners have truly tried to find solutions.

Johnson said during the North Carolina Association of County Commissioner conference this year broadband was his number one issue. He said the county’s survey was a good start and more counties need to do that.

“It’s high on everyone’s list so the general assembly will be looking at it,” Johnson said.

Commissioner Paul Beiler said he appreciates feedback from the community.

“There’s not probably anybody here that has complained more about Windstream than myself,” Beiler said. “To Windstream.”

Former commissioner says Polk should get rid of Lake Adger