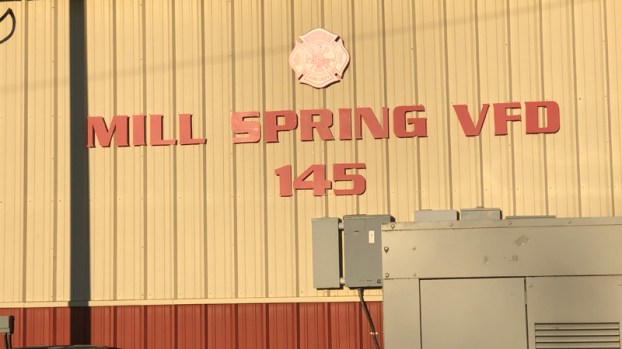 Mill Spring Fire Chief Phillip Ravan said there are plans in place to correct deficiencies in the department after the Office of State Fire Marshal’s Office sent a letter this week saying the department was non-compliant. (Photo by Leah Justice/Tryon Daily Bulletin)

Chief has plans for state non-compliance

MILL SPRING—Mill Spring Fire Chief Phillip Ravan says his department has new members and is recruiting more and has other plans in place to comply with the state’s requirements.

Ravan responded to the Bulletin Thursday after the Office of the State Fire Marshal sent the county a notice that the department was not in compliance for state minimums.

“We currently have four new members that are on their six months probation, and we are actively working on recruiting new members,” Ravan said. “As far as the equipment inventory and maintenance records, we are having a chief officer sign the equipment checks each week to make sure they are being completed.”

Ravan also said the department is going to begin doing extra equipment checks during their meetings and he is currently looking for a refresher Chief 101 course to take.

The OSFM gave the Mill Spring Fire Department time to fix the deficiencies and after an action plan is approved, the station will have six months to make the corrections.

The non-compliant letter has no effect on service to the area. The department is still responding to fire calls in the service area as usual.

If the corrective action plan is not completed, homeowners in the area could be affected. The OSFM said failure to meet the minimum requirements for a certified department will lead to a change in the rating classification of the fire district.

Mill Spring is currently rated at a Class 9E and if the corrections are not made the OSFM will change the classification to a Class 10, which would mean higher homeowner’s insurance for residential customers in the district.

The department will also be placed on probation if, after six months, the department does not meet the state minimums.

Town to pick up appliances, furniture, tires, flooring next week    COLUMBUS—Town of Columbus residents can get a free pick-up... read more