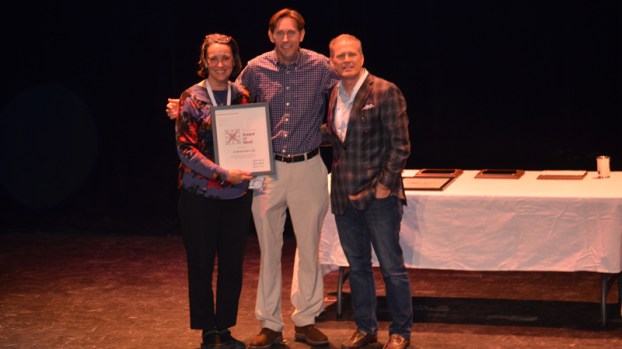 Local residents Gayle and Scott Lane are receiving one of the 2018 Gertrude S Carraway Awards of Merit.

And the winner of Carraway Award goes to…

Recently local residents Gayle and Scott Lane were recognized for their restoration of the Missildines, Bank and Jackson buildings on South Trade Street in downtown Tryon. The Lanes were recognized at the Preservation North Carolina annual conference on March 22nd.

Their recognition is for 2018 and was originally planned for October but Hurricane Michael created a change in plans. Pictured are Gayle Lane, Andrew Stewart, Vice Chair of PNC, and Scott Lane. The Carraway Award was presented at Thalian Hall in downtown Wilmington, NC.

The Lanes helped breath life into downtown Tryon when they purchased and restored the three buildings at the corner of Oak and Trade Streets. These buildings sat vacant for more than eight years until Scott and Gayle acquired the properties, organized as Missildines LLC. Their efforts gave each building a unique color scheme, window configuration and storefront design based on historic photographic evidence.

The Gertrude S Carraway Awards of Merit is one of the most prestigious preservation awards given in North Carolina. Presented since 1974, these Awards of Merit give deserved recognition to individuals or organizations that have demonstrated a genuine commitment to historic preservation.

Founded in 1939, Preservation North Carolina is North Carolina’s only private non-profit statewide historic preservation organization. Its mission is to protect and promote buildings, landscapes and sites important to the diverse heritage of North Carolina.