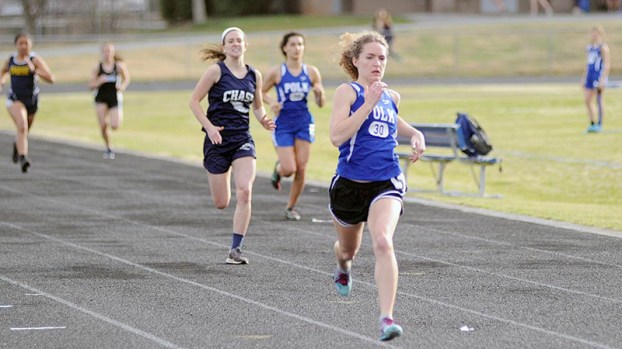 To borrow the oft-spoken words of Polk County track and field coach Alan Peoples, Tuesday was “a very good day” for the Wolverines.

Polk County’s boys and girls held their own against some of the area’s top programs at the Falcon Invitational at West Henderson, with the Polk boys finishing second behind Asheville in the 14-team field and the Polk girls taking third behind T.C. Roberson and West Henderson in a 13-team field.

The Wolverine boys brought home a number of top-three finishes, led by Luke Sellers, who won both the shot put and discus. Also finishing with event wins were Caleb Potter in the 1600 and Jake Justice in the pole vault.

Potter also finished second in the 3200, with the Wolverines’ 4×200-meter relay team of Gage McSwain, Qualon Sutton, Jonah Wyatt and Mitchell Yoder and Jack Derkach in the 800-meter run also taking second. Earning third-place finishes were Yoder in the 200, Hayden Shumate in the discus, Justice in the long jump and Gaige Lewis in the high jump.

Olivia Overholt paced the Polk girls with wins in the 800 and 1600-meter runs and helping the 4×400-meter relay team take first, joined there by Izzy Jackson, Mariah Overholt and Marissa Twitty.

Jackson won the 400 meters, with Mariah Overholt in third and Twitty in fourth, while Emmie McDowell took second in the 300-meter hurdles and Tana Harris finishing second in the pole vault. Twitty grabbed third in the long jump, with Olivia Overholt placing fourth.

Polk County’s teams will gear up for their final home meet of the season on April 6, hosting the Times-News Invitational.

Reese Alley scored a goal and assisted on two others and Sara Muse turned aside a late penalty kick to... read more