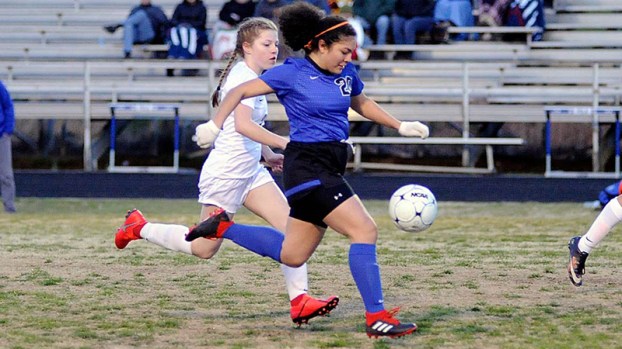 Reese Alley scored a goal and assisted on two others and Sara Muse turned aside a late penalty kick to lead Polk County to a 4-1 win Friday at West Henderson.

Alley scored in the 14th minute of the match on an assist from Jen Guerrero to make it 1-0, and the Wolverines scored again four minutes later as Ava Marino tallied on a flick from Alley after a throw-in from Rollins Carter.

Polk (2-1-3) upped the lead to 3-0 late in the first half when Calean Gaul rebounded a Madison Geddings shot and scored.

West Henderson (2-9) pulled within 3-1 in the 64th minute, but Geddings scored off an assist from Alley a few moments later to restore the three-goal lead.

Muse, who had six saves, then stopped a penalty kick in the 78th minute to preserve the margin.

Polk County is back in action on Wednesday, hosting Mitchell in a Western Highlands Conference match at 6 p.m.

Fit to be tied: Polk battles to draw

Telling the story of the first five matches of Polk County’s girls soccer season might be summed up with an old... read more