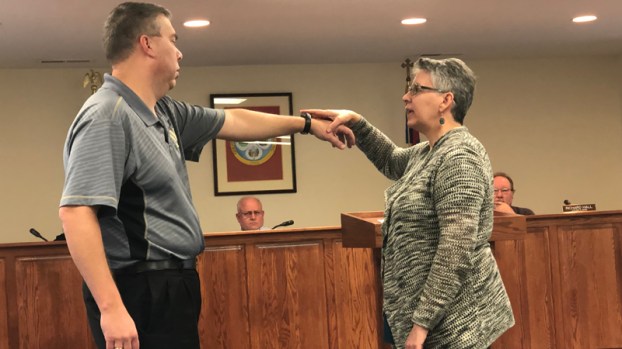 Dr. Winn Sams attended the Columbus Town Council meeting Thursday to ask for the town’s support of her filing a complaint against Duke Energy’s new smart meters. She did a demonstration on town councilman Mark Phillips. (Photo by Leah Justice/Tryon Daily Bulletin)

Sams said she has opted out of using the new technology because she believes it lacks adequate testing on the affects of the radio waves emitted by the Smart Meters.

“As many of you know the smart meters have been installed for years. The first time it came around I opted out and kept my analogue meter. I do not believe it has had adequate studies on how it affects people. They say it is no different from cell phone or microwaves. Customers can opt out at a (one time) $150 fee with an additional $11.75 fee per month.”

The complaint that Sams is in the process of filing is targeted at the increase in her monthly bill, the $11.75, to avoid a service she does not want. Through contact with Duke Power she has found that the only way to have the fee waved is to have a notarized statement from a medical physician, which she told council is impossible to get.

Duke Power’s website contains separate links to the Smart Meters and the opt out process.

“Customers who provide Duke Energy with a notarized statement from a medical physician licensed by the North Carolina Medical Board citing that the customer must avoid exposure to radio frequency (RF) emissions, to the extent possible, to protect their health will have both the one-time and monthly fees under Rider MRM waived going forward, once the waiver request is approved,” she said.

Sams made it clear that she likes technology and the progression of science but that she is uncomfortable relying on a service that she does not fully understand. The electromagnetic waves emitted from the Smart Meters come in the form of a concentrated burst. It is that burst of radio waves that Dr. Sams warned the town council and customers of Duke Power against.

“I have no problem with something being installed if I know that it is tested and I know what it is doing,” Sams said. “When you have something that is installed that is affecting you and your environment, you want to know as a consumer what it is being done. I would like as much support as I can from the council to be able to keep my analogue meter.”

Councilman Mark Phillips showed said he supports Sams personally and asked to receive copies of all of her research on the subject as well as a copy of her formal complaint. Phillips has his own personal reasons for objecting to the change of a Smart Meter but has not been forced into opting out and paying the additional fees yet, he said.

“I am with you 100 percent on this issue from a personal standpoint. What would you like us to do as a board?” Phillips said.

The council, with the recommendation of Sams, tasked the town attorney, Lora Baker, to look into the matter from a legal perspective and attempt to discern any information on the possible franchise agreement between the town of Columbus and Duke Energy.  Council did not make a decision during the meeting on Thursday night but agreed to continue looking into the matter.

The EMF Safety Network is one of the leading opponents to the new series of Smart Meters that measure power, gas, and water consumption. All three types of Smart Meters operate using radio frequency or RF. Most of the studies and legal action that is being taken against Smart Meters is occurring in California.

The EMF Safety Network also reported that California residents have filed health complaints against power companies as a result of Smart Meter installation.

Sams used many of the ongoing studies in California as well as the legal action being taken in California as a basis for her appeal to the town council. While Duke Energy’s website focuses on the positive side of the Smart Meters and the fees a customer will be forced to pay if they choose to opt out, they do not currently display any information on the possible side affects or health risks of the Smart Meters and the RF radiation.