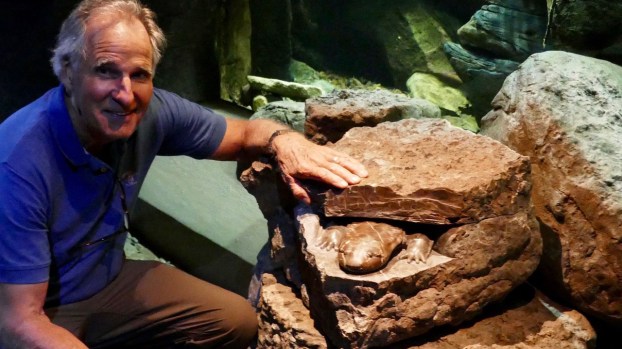 Dale Weiler inspects his wildlife sculpture of an Eastern hellbender, “Hellbenders Rock,” at the installation this last spring. Weiler will share more about his artwork and his passion for wildlife conservation at the next meeting of the Tryon Garden Club on Jan. 16. (Submitted photo)

The Tryon Garden Club will meet on Wednesday, Jan. 16, at Foothills Equestrian Nature Center with a program on attracting wildlife to one’s garden using native plants.

Dale Weiler, a wildlife sculptor, and his wife, Loti Woods, will discuss how they are transforming their backyard into a native plant haven for wildlife.

The program, which begins at 2 p.m., is free and open to the public.

They will also share their story of meeting late in life and combining their passions for wildlife conservation. Out of this love for conservation came a new interest in gardening and creating a habitat to attract wildlife.

Their discussion will include which plants attract which kind of animals. In just the first year, they have seen much more wildlife activity, they said.

Weiler and Woods own Weiler Woods for Wildlife, which uses his sculptures to inspire wildlife conservation by raising awareness and funding for endangered animals and their habitat. Weiler will bring some of his wildlife sculptures, which were inspired by observing nature close to home.

His latest wildlife sculpture, “Hellbenders Rock,” of an Eastern hellbender, was installed in a new hellbender exhibit at the North Carolina Zoo this last spring.

He is currently finishing a sculpture of a red wolf mom and her pup. The only wild population of red wolves in the world lives in North Carolina, on the Eastern Shore.