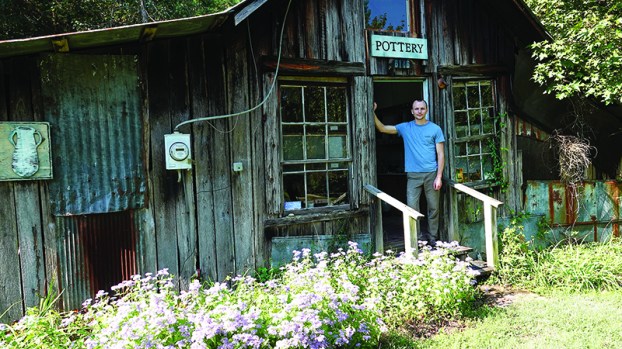 At the Little Mountain Festival, guests find more than music and art

When artist Tyson Graham opened his pottery kiln at the appointed time of 11 a.m. on Saturday, Oct. 13, at the 43th Little Mountain Festival in the countryside of Tryon, everyone gathered around for a big surprise.

One to two hundred people were expected to come to the rustic country homestead, to a studio that is a shack of a building on Peniel Road. They would come for the music, the art, the fellowship.

But mostly, they would come to see Tyson’s latest creations in ceramics: functional (you can eat out of them) pitchers, vases, lidded canisters, casserole dishes, plates, platters, bowls, mugs and tumblers. 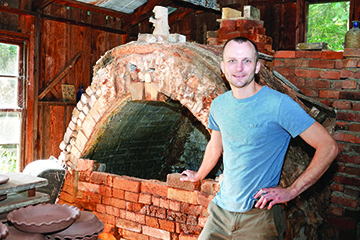 There would be established and original designs of yellow daffodils on black, blue ageratums and green leaves on white, white snowdrop flowers, blue birds, fish, bunnies, chickens, musical instruments. A guest could purchase a single dish to add to a personal collection or a complete matching table setting for eight.

It would be a full day of friends and family, musicians and art lovers hanging out on a fall day to look and learn, to play and hear pre-bluegrass music, to let the kids run in the grass — but the initial focus would be the kiln opening.

Would they find dozens of beautiful ceramic dishes?

Or, would they find rubble? 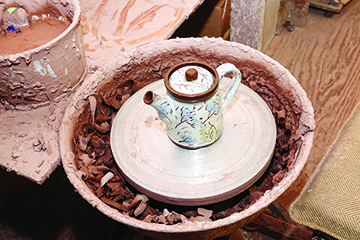 “At this point, I’ve fired the gas kiln enough that the results are relatively predictable,” Tyson says. “The first year or so, this wasn’t the case! The worst that tends to happen lately is a few pieces might crack or warp during the firing, and in that case, I would use the opportunity to explain the firing process and the all the variables that go along with using an old large gas kiln.”

All would be Tyson’s work, designed, wheel-thrown, glazed and fired in a drafty-in-the-winter and sultry-in-the-summer building, built in the late 1800s as a general store. For a day that held all the promise of community and fellowship, a successful traditional kiln opening would set the tone of things to come.

They would come in anticipation of seeing Tyson’s brand of ceramics hot out of the kiln. They would stay for the fun.

“This event is a great opportunity for people to visit a historic rural pottery studio and experience some of the music and art of the Foothills,” the entrepreneur says. “It’s a family-friendly environment and always fun! I think traditional arts, crafts and music are very important and need to be cherished. With the push these days for all things digital and technical, for me it’s become more and more important to stay connected to things that are tangible and real.”

Traditional kiln openings are rare in today’s art world. By definition, a “traditional” kiln opening is when the artist opens the sealed kiln, letting everyone — including the artist — see for the first time what’s inside.

For Tyson, the event is a little nerve-racking, knowing that it could be a “bad firing.” 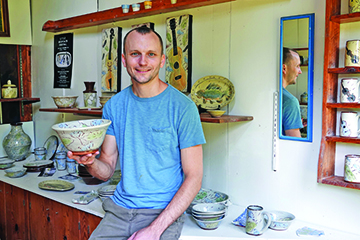 “The weeks leading up to the kiln opening are always very busy,” Tyson said. “There are hundreds of pots that I’ve been working on for months that all need to be decorated, glazed and fired, so there’s always a little stress with getting everything done. I usually fire the kiln two or three times leading up to the festival, with the last firing being unloaded during the event. While that last firing is cooling, there’s always anticipation: how did the firing go? Did my glazes work correctly? Is anyone going to show up?

“On the day of the event, folks pack into the back of the studio around the kiln, and they’re all eager to see the pieces as they come out.”

Today, not many commercial artists are willing to take the chance of publicly opening a kiln gone bad. They would rather open the kiln in private, get rid of the mistakes, clean up the good stuff and put it back in the cold kiln for a somewhat-ceremonial public opening.

Tyson confirmed that he and most potters create their ceramics with an element of uncertainty, not totally sure how the creative and technical elements — clay, technique, glaze, firing, cooling — will come together in the finished pieces. And anything can go wrong.

Good kiln opening or not, the Little Mountain Festival would go on, and a good time would be had by all. It’s a local tradition, although not all that well known outside of the Carolina Foothills.

The festival of live old-fashion country folk music and displays of local art started in 1973, when artists Claude and Elaine Graves owned the studio building that is now simply Tyson Graham Pottery, but sometimes still referred to Little Mountain Pottery. People would come for the day, bringing picnics, children, musical instruments and food.

The expanse of grass between the studio and the main house would have vendor tents and pockets of pick-up musicians. Over the years, it grew to an attendance of a couple hundred. The festival also coincided with national American Craft Week.

“We’re very good friends,” Tyson says, referring to the Graves. “[My wife] Darby and I live just down the driveway from the Graves, so we see them quite a bit. We get together regularly for supper and a few tunes, and they pop by the studio every week or so to see what I’ve been up to. They’ve passed down their 40 years of ceramic knowledge, invited me to work in their studio and trusted me to carry on their tradition. I’ll be forever grateful for all they’ve shared.”

This would be Tyson’s fourth year of hosting Little Mountain Festival. However, its roots go back more than four decades, to when the Graves owned the property and started the gathering.

As a musician, Tyson had attended several times, and about six years ago, almost by chance, he was asked by the Graves if he had any interest in pottery. He was, after all, an artist with a degree in design.

He had never really given pottery much thought, but he was ready for change and to leave his hometown of Columbia, South Carolina. He agreed to a one-year apprenticeship with the Graves, and took a few basic ceramic courses to brush up on his new medium.

In the winter of 2014, Tyson and his family moved to Tryon. Now, the Graves have retired, and Tyson, 34, has taken over the studio, established his own brand of nature-inspired ceramics, and carries on their tradition of hosting the festival in the fall.

“I can look back at what I was seeking when I first started coming,” Tyson recalls. “While I was in college and later working in Columbia, I would drive up here every year for the festival. It felt like stepping back in time, and there was a real sense of community surrounding the pottery studio. I suppose I was drawn to that community of folks who were doing what they love, whether it be music, crafts or art.

“I’ve been so fortunate to have the opportunity to work in such an old studio with such a rich history, and it wouldn’t be possible without the support of so many people. At these events, I look around and see my family, friends and people from all over, all brought together by an appreciation for the arts and music of our region. There are always new faces, as well as folks that have been coming for 30 years or more, and they all tend to be smiling!”

Using a motorized kick wheel to thrown his pots and a gas-fueled kiln made by Claude to fire them, Tyson carries on many of the traditions and techniques set forth by the Graves. But his designs are his own, and creating them is the hardest part of his process.

Using only red earthenware clay out of North Carolina and Georgia, Tyson looks no further than out of his studio windows to find inspirations for his popular “nature-inspired” designs.

“I make mostly simple, functional pieces that are decorated with patterns and imagery that directly reference my daily life,” Tyson says. “With both pottery and music, the process becomes calming and meditative, and, if you over think things, it’s not as successful. I try to create work that has a certain fluidity and effortlessness to it, and the process evolves over time.”

“It is all part of my life now. I don’t look too far for my inspiration,” he says, standing just outside of his studio on sunny day in the country, looking at the yard that would soon be filled with art and music lovers attending the 43rd Little Mountain Festival.

And still the question loomed: what would he and his guests find when he opened the kiln? •

Steve Wong is a writer living in the peach orchards in Gramling, South Carolina. He can be reached online at Just4Wong@Gmail.com.