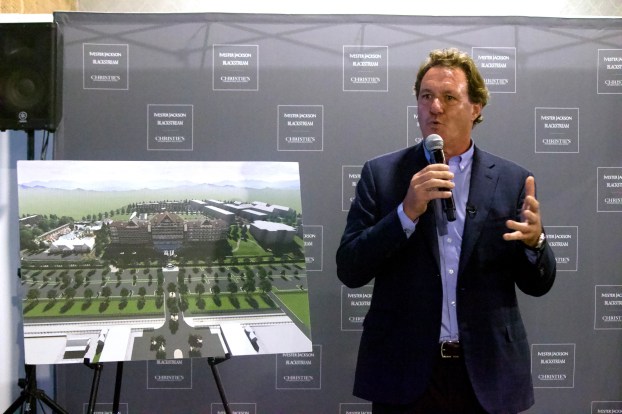 Tryon International Equestrian Center’s Mark Bellissimo shows off a site map of the proposed Tryon Village development project that is planned for the property. The managing partner of the equestrian facility answered questions about the 2018 World Equestrian Games and about the future of TIEC during a Q&A Friday evening. (Photo by Ted Yoakum/Tryon Daily Bulletin)

Looking past the ‘chaos in Tryon’

MILL SPRING — While taking responsibility for the setbacks that have made headlines over the past several weeks, Tryon International Equestrian Center’s Mark Bellissimo is hoping that people will remember the 2018 World Equestrian Games for its positives, rather than its negatives.

A few days before the international sporting event’s final day of competition on Sunday at the Mill Spring facility, Bellissimo, the managing partner with Tryon Equestrian Partners, fielded questions from the press during a special media cocktail hour Friday evening. The equestrian business mogul addressed the issues that have surrounded WEG and TIEC over the past several weeks, while also expressing optimism for the future of the facility and its planned residential expansion project.

WEG — organized by TIEC and international equestrian sport governing body Fédération Equestre Internationale — ran from Sept. 11 to Sunday at TIEC. The event drew equestrian athletes and horses from nearly 70 nations — who competed in eight different disciplines for both team and individual awards — as well as thousands of international spectators to the rural community.

The event was rife with setbacks from the beginning, however, including issues with inadequate housing for grooms (attendants responsible for the care of horses), the cancelation of the endurance race and the freestyle dressage competition, and the death of two horses following competitions. Adverse weather stemming from Hurricane Florence also caused a dip in attendance, Bellissimo said.

Despite the shortcomings, Bellissimo said that WEG ended on a strong note, with several competitors and spectators remarking that the level of competition and excitement of the sport was higher than they have seen in years, he said.

“The stories that ran on a daily basis weren’t about the great things that were happening in this sport,” Bellissimo said. “It was about the ‘chaos in Tryon.’ …If that is the living remnant of this event, then shame on us, it’s disappointing. I think there [are] so many good things that happened in this time frame that hopefully it will be represented and presented fairly.”

Bellissimo said he was very proud of what the facility had accomplished in the roughly 18 months he and his team had been given to prepare TIEC for the 2018 WEG, after previous host Bromont Olympic Equestrian Park in Quebec had pulled out in July 2016. The businessman said he expects to break even on the $30 million budgeted for the games — with the possibility of losing $1 to $1.5 million due to event cancelations.

When asked, Bellissimo did not say whether or not TIEC would be willing to host WEG again, though he did suggest to FEI officials that they should consider establishing permanent U.S. and European venues for the event rather than find a new location to host it every four years. Before he would be willing to offer up TIEC as such a venue, the businessman said he would have to assess, with the help of his team, the mistakes that were made this time.

“If we ran this again, would it be unbelievable? Absolutely,” Bellissimo said. “I think this is one of the most unique venues in the world, and I think, in three months, it will be even more unique. In another year, I think this will be incomparable to any other venue.”

With WEG serving as an introduction — “no matter how imperfect” — of TIEC to the international equestrian community, Bellissimo said he and others involved with the facility will continue to push forward with their vision of turning the Mill Spring center into a place where horse enthusiasts can not only come to visit, but to eventually live. The managing partner showed off renderings of the planned Tryon Village development the facility is building, which will include a hotel, condominiums, amphitheater and more, located adjacent to the current TIEC show grounds.

Hundreds from across the country and the world have already expressed interest in moving to the development, Bellissimo said.

“The goal is that people will be able to live, work and play here, and really live the equestrian experience,” he said. “I think you will see, once we build this, there will be thousands of people who will come to this area, and use this as ‘ground zero’ for equestrian sport in this country.”

Caring for horses from across the world

Landrum farrier shares experience working at WEG MILL SPRING — Though his job as a master farrier has taken him... read more