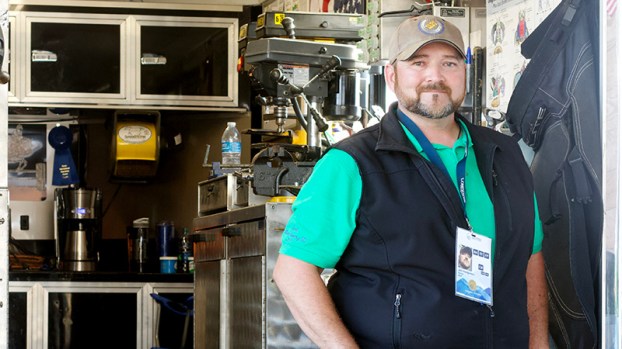 Caring for horses from across the world

MILL SPRING — Though his job as a master farrier has taken him to stables, racetracks and horse arenas across the country, Landrum’s Jack Montgomery III largest assignment has taken place right in his backyard.

The third-generation equestrian craftsman has been hard at work the past several weeks, helping with the hoof care needs for dozens of horses hailing from nations across the globe as the resident farrier of the Tryon International Equestrian Center, the host of the 2018 World Equestrian Games, which takes place through Sunday at the Mill Spring facility. 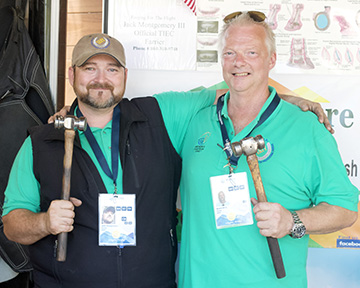 Landrum’s Jack Montgomery III (left) poses for a photo with fellow farrier Bjoern Berg, a member of the International Association of Professional Farriers. Montgomery, the resident farrier at Tryon International Equestrian Center, has assisted with the hoof care needs for horses during the 2018 World Equestrian Games, which takes place at the Mill Spring facility through Sunday. (Photo by Ted Yoakum/Tryon Daily Bulletin)

In the days leading up to the Sept. 11 WEG opening, Montgomery was responsible for assessing the hoof care needs of 52 horses. Since then, he has responded to the needs of nearly a dozen more animals.

In total, the farrier has helped care for horses with 12 different nations, including those with the U.S. dressage and eventing teams, as well as teams from Brazil, Columbia and Ireland, he said.

This year’s WEG — Montgomery’s first — has also allowed him to work alongside some of the top farriers in the world, he said.

“It’s been amazing,” Montgomery said. “Just to have everyone here, from all these countries together, and see the comradery between everyone, has been really amazing…we’re like one giant equestrian family.”

WEG will certainly go down as one of the highlights of Montgomery’s career in equestrian care, he said.

A native of Ionia, Michigan, Montgomery grew up around horses on the family’s 72-acre farm. With his home nestled between Amish farms — and lacking TV — Montgomery had plenty of time to get familiar with the animals residing in his family’s stables.

“I remember, beginning when I was 6 or 7 years, coming home, tacking the horses and just riding for three or four hours at a time,” he said. 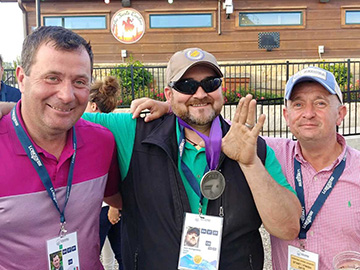 Montgomery (center) shows off a silver medal won by the Irish eventing team, whose horses he helped care for during the event. (Submitted photo)

His father worked as a farrier caring for horses used for fox hunting. Jack III was brought into the fold at an early age, learning the secrets of the trade from his dad, developing a deep passion for equine care in process that he has followed ever since.

After graduating from farrier school in Oklahoma, Montgomery moved south to the Carolina Foothills in 1998, where he learned more about the craft while shoeing for Jimmy Misenheimer, he said. He also began working with horses at shows taking place at Foothills Equestrian Nature Center, including with the Block House Steeplechase when it was still held at the Tryon facility, Montgomery said.

His talents soon caught the attention of others in the equestrian world, as Montgomery began caring for horses following the hunter/jumper A-circuit. His work took him across the East Coast, including frequent trips to Wellington, Florida, one of the epicenters of the equestrian world.

In 2014, the Landrum man was asked to serve as the resident farrier of the Tryon International Equestrian Center, an opportunity he was eager to seize.

While his skills and expertise have opened many opened doors — besides WEG, the man will have the opportunity to serve during the 2020 Olympics Games in Tokyo — Montgomery said what motives him to continuously learn and further hone his craft are not achievements or accolades, but his passion doing what is best for horses. For him, it does not matter if he is caring for a multimillion dollar horse competing in a grand prix event or for a little girl’s first pony — his only concern is for the welfare of the horse, he said.

“I love the fact I have a job where I’m able to use my mind and my hands for something,” he said. “You get to help horses out, and make some neat stuff along the way.”