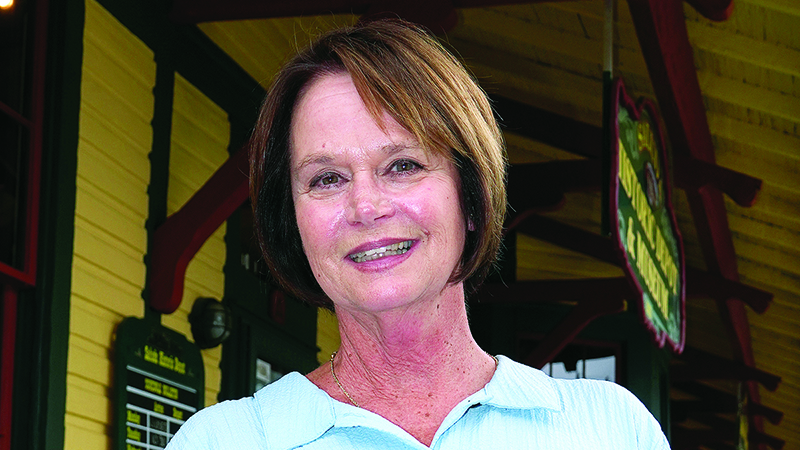 Cathy Jackson is especially proud of the work she did as a board member with the Saluda Historic Depot & Museum to preserve the building as a lasting tribute to the town and its history with the railroad.

But anyone who has spent even an hour in Saluda the past decade or more knows this town is a bustling success. A lot of that is due to Cathy’s tireless efforts.

Cathy wears many hats around Saluda. Even though she’s eyeing retirement from her successful career in real estate, Cathy, just like her adopted town of Saluda, is not about to take it easy.

Cathy came to Saluda 17 years ago from Knoxville, Tennessee, where she had worked in educational technology sales. She saw Saluda as a place to “slow down,” and worked out of Saluda as a consultant in the same industry, though she soon realized her job involved a lot of traveling, and she loved her new home so much that she wanted to stay and put down roots. 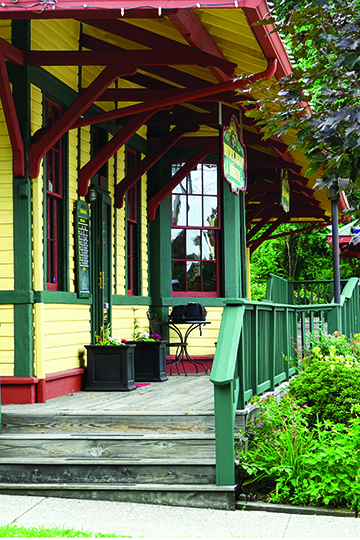 She started her own real estate company, and made a success of it, even through 2008’s economic downtown.

She was pleased and a bit relieved when Beverly-Hanks negotiated an offer to take over her business in 2015. Cathy saw this as a chance to continue in real estate sales, but also give her more time to find ways to toot Saluda’s horn — or, in this case, train whistle.

The history of Saluda is important to Cathy, and she has made it a goal in life to help preserve it.

“People should always remember the history of Saluda. We shouldn’t forget what brought us to where we are, and how that shapes how we move forward,” Cathy muses. 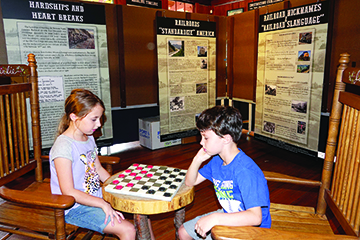 Siblings Leah and Declan Hansen, of Tampa, Florida, start their game of checkers inside the museum. Professionally-created exhibits fill the background.

Cathy, along with several like-minded Saludians, was active in saving the old Saluda train depot. Cathy is quick to point out that it takes a village to preserve a village, and she’s just one of many people who helped save the old station house.

It’s obvious that this was just one of the accomplishments Cathy is very proud of. As I watch a stream of visitors tour the Historic Saluda Depot & Museum during our hour together, it shows on her face how pleased she is with the success of this one historic site.

Cathy is excited to discuss the “Saluda Train Tales,” a series of free presentations held at the Saluda Depot each month. Some presentations might be about the history of Saluda as a train town and others about any of a variety of topics, such as the August talk by Clara Carter, VeeVee Blackshear and Nettie Sweet on the “Medical Heritage in Saluda.”

These monthly talks are helping preserve the history of Saluda with storytelling, an art that Cathy says needs to be nurtured so that it continues for future generations to enjoy and appreciate.

Cathy explains that the entire Saluda downtown (with perhaps the exception of one building) is on the National Register of Historic Places. In fact, she has been instrumental in getting plaques mounted on just about every historical building in downtown Saluda.

One of Cathy’s future retirement goals is to write, but she’s had years of on-the-job practice as the founder and editor of Saluda’s homegrown news source, “Saluda Lifestyles.”

Cathy came about this serendipitously when she moved to the mountain community, and discovered a little homegrown Saluda newspaper called “The Saluda Signal.” Ruth Anderson published that paper for 20 years, and Cathy eventually started to write a regular column for the paper called “Saluda Scoop.”

One thing led to another, and eventually Ruth was happy to let her paper catch up with computers, and “Saluda Lifestyles” was launched by Cathy.

Today, well over 5,000 subscribers electronically receive the monthly preview of all that’s about to happen in and around Saluda, and hundreds more pick up a printed copy at various locations around town.

You can subscribe to the electronic version at saludalifestyles.com.

And Cathy Jackson isn’t keeping it a secret anymore. •

Mark Levin has recently retired from a career in education and, along the way, has had a lifetime of experiences, earning a buck as a photographer, videographer, author, musician and camp director. You can follow his blog about people and places in the Foothills at FoothillsFaces.com or on Facebook.