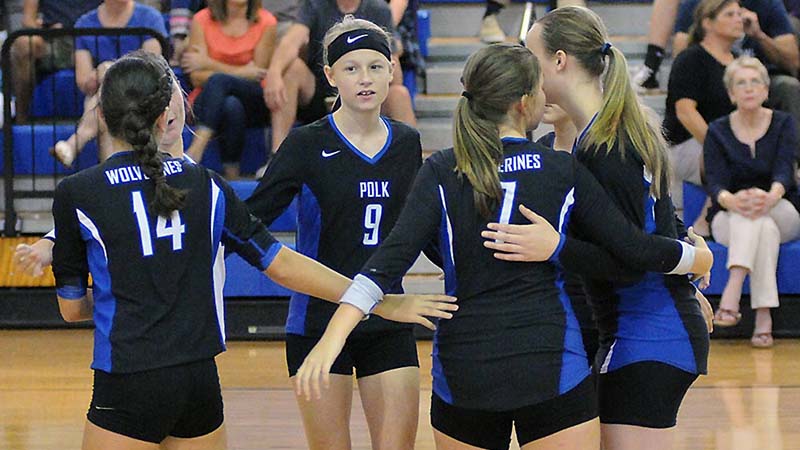 Polk County Middle’s Ella Waldman unleashed a magical spell of serving to stun Asheville Christian Middle, serving the final nine points of the Wolverines’ 2-1 win over the Lions in the season opener for both teams at Polk.

Adair Edwards kept Waldman’s run alive with a spectacular play at the net, digging a ball falling to the floor out of the net and bumping it not only in the air, but over the net for a point. That shot evened the final set at 9-9, and Waldman followed with five straight aces to bring about match point.

The Lions were whistled for a net violation on the final point, ending the match.

“Our serving set things up for us,” said Polk Middle head coach Matthew Russell. “When we hit our hard serves and hit our spots, that’s what gave us momentum and put so much pressure on them.

“Ella in the final stretch was unbelievable. She’s an eighth grader and a captain, and she’s a total gym rat. We have to kick her out when it’s time to go. She’s always in here working on her serve.”

Polk Middle took the lead midway through a close first set, only to see ACM close within 21-17 late. Susanna Ashworth’s kill stopped the ACM rally and made it 22-17, but the Lions closed to within 23-21 before a Waldman kill from the back row and an ACA error ended the set.

Polk Middle then raced to a 7-0 lead in the second set behind the serving of Edwards and Waldman, only to see the Lions roar to life and tie the match at 9-9. ACM snapped a 19-19 tie with three straight points and held on to force the deciding third set.

“I’ll gladly take a win to get things started,” Russell said. “Asheville Christian made it closer than we cared for it to be, but it was good to see the girls show some resilience and show some fight.”

Polk Middle is back in action Wednesday, traveling to Madison Middle.