Wolverines battle, but Eagles too much to ground in 40-8 setback 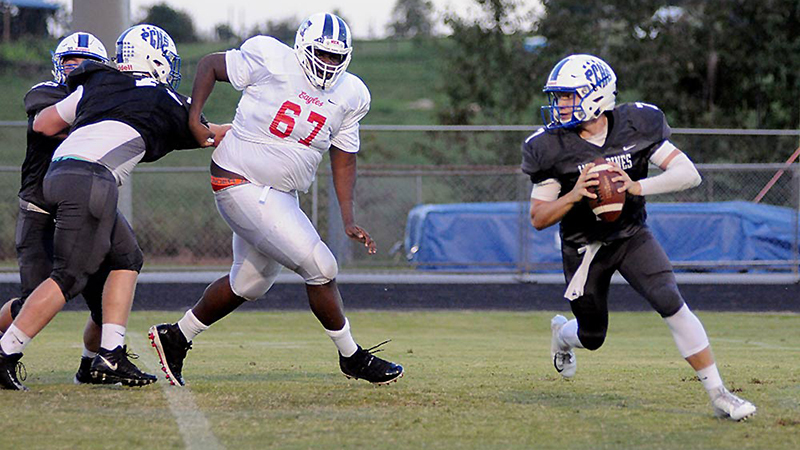 National Christian Academy quickly made a statement Friday about the quality of its football team.

Polk County offered a pretty good response about the mettle of its squad.

The Maryland-based Eagles exploded for 34 points in less than 12 minutes of the first half, fueling a 40-8 victory over the Wolverines in their home opener at G.M. Tennant Stadium.

Size, speed, athleticism – National Christian displayed all of that in building a 34-8 lead by the midpoint of the second quarter. The Eagles often lined up in a five-receiver set, stayed in a spread look the entire game and never huddled, looking to keep the game at a high tempo.

Polk County, which scored on its opening drive and led 8-0, did not aid its cause with four turnovers, two of those helping spark the Eagles’ early surge. But the Wolverines (1-1) remained undeterred, holding National Christian to a lone score the rest of the night and battling until the final whistle.

“Quality, quality football team,” said Polk County head coach Bruce Ollis. “I think we put a little fear in them that first drive, we took the ball right down there and scored.

“But we didn’t get off the field much defensively in the first half, and you throw four turnovers on top of that and it makes for pretty ugly football, from our perspective.”

Polk County found running room tough to find all night against an NCA defense led by standout sophomores Terion Sugick, Monkell Goodwine and Banham Taylor. The Wolverines finished with 109 total yards, 103 of those on the ground.

“I felt good about our effort. I felt we played hard. Sometimes our hard just wasn’t good enough,” Ollis said. “But I’ll jump in the same foxhole with these guys any time I can. We’ll learn from this and hopefully be able to check one off in the left-hand column.

“We didn’t tackle very well, but a lot of that had to do with their athleticism. [Johnson], I don’t know if that had been a flag football game sometimes if we would have gotten him down. He was tough to handle. And their big offensive line was pretty impressive. But we were in there scrapping and playing hard the entire time, and I think that’s a positive thing. Our kids never backed down.”

Bryson Seay rushed for 44 yards to lead Polk County, with Yoder adding 41 yards on nine carries in his first start, as senior Elijah Sutton will miss the rest of the season due to a knee injury. Yoder also added an interception.

Lea finished 9-of-12 for 157 yards and three touchdowns. Mackall had 120 yards on five carries to lead the NCA rushing attack, as the Eagles finished with 429 total yards.