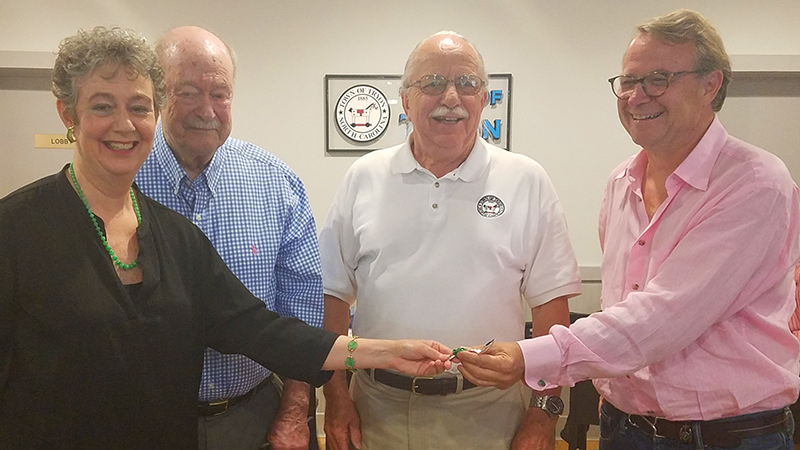 TRYON — The town of Tryon is honoring one of its forefathers by naming Aug. 31 as Lemuel North Wilcox Day.

Wilcox purchased 3,880 acres of land in 1869, much of which later became downtown Tryon.

The resolution was presented to Wilcox’s great-grandson, Keith Grady.

On Aug. 31, 1869, Wilcox, of Pittsburgh, purchased the land from Dr. Columbus Mills, including much of the Pacolet Valley, Tryon Mountain, Hogback Mountain and the future downtown Tryon.

Wilcox and his father-in-law, the Rev. Leland R. McAboy, converted the Columbus plantation house to the McAboy House, a resort hotel, which drew visitors from around the region and country. 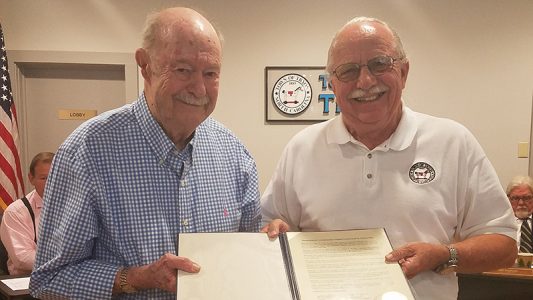 Wilcox created the first map of the town of Tryon in 1877, which the town had framed and displayed during Tuesday night’s meeting.

In May 1876, Wilcox granted the right-of-way for the Spartanburg and Asheville Railroad to build the railroad through his land. Wilcox also donated several tracts of land to the town, including land for the Holy Cross Episcopal Church, town streets and the town’s cemetery.

“As a direct result of Lemuel N. Wilcox’s vision and industriousness, the town of Tryon came into being in its current location and name,” said Tryon Mayor Alan Peoples as he read the resolution.

Fran Grady, Grady’s daughter, was also present, and said none of this would have been possible without Robert Lange, who found the history on Wilcox.

“The detail he’s found out about our family, a lot of it we didn’t know,” Fran said.

She presented Lange with a teaspoon with her great-great- grandfather’s initials on it.

“My father loves Tryon,” Fran said. “He’s grown up coming here. So it just kind of came full circle finding all this.”